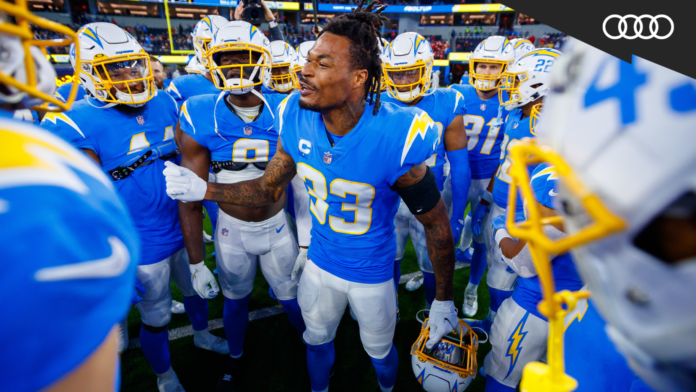 Derwin James, Jr., the heart and soul of the Chargers defense, was never going anywhere.

The Chargers and James agreed to a multi-year contract extension Wednesday morning, a move that ensures a key piece of the franchise will don the powder blue for the foreseeable future.

James was in the final season of his rookie contract. The 17th overall pick in the 2018 NFL Draft, James burst onto the scene as a rookie, earning All-Pro honors to go along with a Pro Bowl nod.

Yet after injuries limited him to five total games in 2019 and 2020, James showed his resolve by putting together another Pro-Bowl season in 2021 — the first season under Chargers Head Coach Brandon Staley.

And it was under Staley that James blossomed into a Swiss Army knife on defense.

Take a look back at the best photos of Derwin James from the 2021 season.

James has five interceptions, 14 tackles for loss and three forced fumbles in 36 career games, and has already showed tremendous perseverance in his career.

But forget about the box score stats for a second. James’ impact on the Bolts goes deeper than that.

Yes, James is technically listed as a safety on the Chargers depth chart. After all, that was the position he played while starring at Florida State, where he was an All-American in the secondary.

In Year 1 under Staley, however, James proved just how valuable — and versatile — his skillset is.

It was only Tuesday when Staley himself stepped to the podium and raved about the many ways James can impact the game.

In Staley’s defensive system, that means James is lining up in numerous positions.

In Staley’s scheme, the nickel cornerback is called the ‘Star’ position.

Staley also has a position titled ‘Money,’ which is essentially a hybrid of a linebacker-safety that plays up in the box.

James can handle that, too.

Finally, Staley also sometimes employs him at the ‘X’ position, which is more of an edge rusher role for James.

So yeah, calling James a safety simply lightens the immense impact he has week-in and week-out.

“If you just looked at him as a safety playing safety, you wouldn’t look at him as the same way you do as a defensive back,” Staley added.

Some Sundays, he might be tasked with shutting down elite tight ends such as Travis Kelce or Darren Waller. Other games, he could key in on an opposing running back, or make sure the back half of the field is secure from any deep passing threats.

In other words, James pretty much does it all over the course of an entire season.

Staley also used the term “intangibles of impact” to describe the effect James has on the Bolts as a team, and his teammates on a personal level. A team captain, James is one of the most beloved players in the Bolts locker room.

James watched from the sidelines through the first 14 training camp practices, coaching up his teammates and participating in the walk-through portion of practice.

“He’s still the alpha guy when he steps out here,” Staley said on August 5.

Yes, the Chargers spent big in free agency by bringing in stars such as Khalil Mack and J.C. Jackson, plus other key pieces such as Bryce Callahan, Sebastian Joseph-Day, Austin Johnson and Kyle Van Noy.

And there is plenty of defensive talent that has been here already, whether that’s Joey Bosa or others.

But it’s James who makes Staley’s defense go, acting as a do-it-all chess piece who can impact the game perhaps more so than any other defensive player on the Chargers roster.

“He’s a guy that is going to get it quickly when he gets back in and you’ll feel his presence,” Bosa said on August 7. “I think, if anything, it could be a benefit to try to be better as a team without him in there.

With a new contract in hand and his focus is fully on the 2022 season, the possibilities seem endless for James and the Chargers defense.

“]He is] the heartbeat of our defense,” Staley said.

In Support of Black Votes Matter