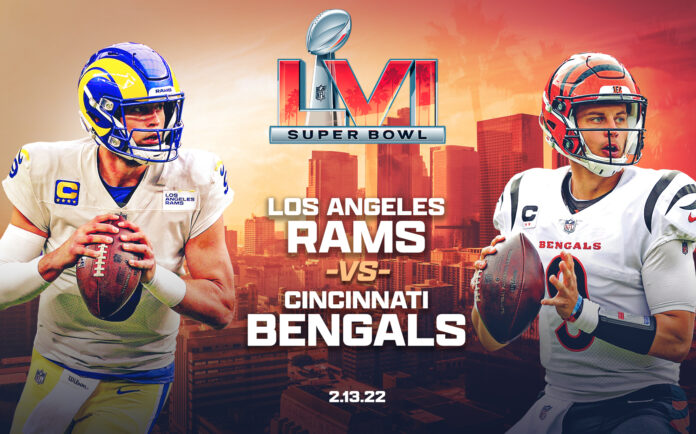 Here’s how you can watch, listen to and live stream Super Bowl LVI between Los Angeles Rams and Cincinnati Bengals on Sunday, February 13, 2022.

The Rams are home for the Super Bowl, taking on the Bengals in the first-ever postseason meeting between the two teams. Kickoff from SoFi Stadium in Inglewood, Calif. on Sunday is scheduled for 3:30 p.m. pacific time on NBC.

Sunday’s game will mark the 14th all-time meeting between the two teams, with the Bengals leading the series 8-6. The Rams won the last meeting 24-10 at Wembley Stadium in London on October 27, 2019.

Predict the action during Super Bowl LVI to win prizes at www.therams.com/pickem!

For all rounds of the playoffs the Rams compete in, a top prize of $250,000 will be awarded to anyone who correctly predicts all questions.

For the Super Bowl, the Top 10 scorers can win:

Pair of Rams season tickets for the 2022 season (3rd place)

Fans will also get to compete against Rams Broadcaster J.B. Long every week as a part of our new “Beat the Expert” Competition. For more information on how to play Rams Pick’em, click here.

Loteria is a traditional Mexican card game similar to Bingo, except the game is played with a deck of cards featuring cultural iconography instead of numbered balls. This season, the Rams are bringing their own branded Loteria to gameday! Digital Loteria will be played during all Rams home games – go to www.ramsloteria.com on your phone or tablet, pick a playing card, tune in to the Rams game, and mark each action card once it happens during the game for the chance to win great prizes such as autographed items and Rams gear. Each game will begin at kickoff, but you can register to play at any time here.