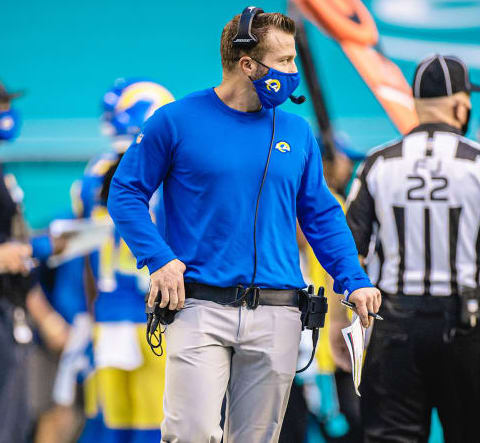 With the bye week getting underway, it’s a good time to get a sense of the state of the Rams after their first eight games.

Here’s a look at where they rank in key statistical categories on offense, defense and special teams, plus Los Angeles head coach Sean McVay’s assessment of each unit from his Monday video conference.

Sean McVay on Rams at the bye week

McVay: “I think offensively it’s been up and down. Yesterday, obviously being as frustrating as it is, it was such a weird game where there’s a lot of positives on some of the early downs and really what it boiled down to was our inability to be able to consistently handle when they were bringing some of their zero-pressures, like I talked about after the game yesterday and that’s what it boiled down to.”

“You give them credit, they did a nice job, but three of our four turnovers came on that and they in essence got 21 of their 28 points off of those turnovers based on the short field where they score a touchdown, one of those drives ends up starting on the 1-yard line and then the other one on the 33 (yard line) which was their longest offensive drive that led to points for the Dolphins offense yesterday, all of which resulted in turnovers from the offense, giving the Dolphins’ offense short fields.”

McVay: “I think defense has been playing at a pretty high level consistently throughout the season. I’ve been very pleased with them, especially each of the last few weeks. They’ve definitely played at a really high level. I think we’re really getting very comfortable with some of the nuances and the newer things that we’re doing, but you’re really starting to see some of our players shine and they’ve done an excellent job. I’ve been very pleased with them.”

McVay: “I thought (special) teams has been steadily improving and unfortunately, yesterday I thought we took a step in the wrong direction based on how I thought Chicago was, by far and away, our best performance this season. I thought we covered really well. We knew we were going to have to do the same thing against (Dolphins WR) Jakeem Grant, a really dangerous returner and we didn’t do that. It’s a great challenge for us to really be able to focus on coming off of the bye, but it’s kind of where I see us right now.”