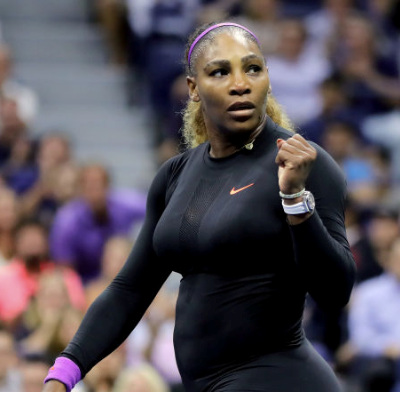 Congratulations are in order as we celebrate more black girl magic with one of our favorite female athletes. On Tuesday night Serena Williams, annihilated Qiang Wang 6-1, 6-0 in the quarterfinals to win her 100th singles victory at the U.S. Open. She’s now just two match wins from the 24th major title she needs to tie Margaret Court’s record (Margaret Court, a former world number 1 is a retired Aussie player who holds the most major tennis titles and is considered as one of the sports all time best players). Williams began the U.S. Open obliterating Maria Sharapova in the first-round.  Last week, after a floppy second round where Serena seemed to be off of her game, one of the post-match interviews when asked, “Serena, you made way too many errors today. What were you thinking?” She replied, “But it’s OK, I’m alive. I’m still here. I’m happy to be on this court somehow and I’ll do better, I promise!” To assure him that she was right on point. She kept her promise. Win after win until the end. The quarterfinal match was less than 45 minutes and tied for shortest finished match of the WTA season.

As we all already know she is coming for Margaret Courts neck for that title, do we also know that it’s time to officially give Serena Williams The Greatest female Athletes Of All Time Title or am I moving too prematurely? Lets note that The Women’s Tennis Association ranked her world No. 1 in singles on eight separate occasions between 2002 and 2017. She reached the No. 1 ranking for the first time on July 8, 2002. We are rooting for Serena and wishing her the best of luck as she approaches the semifinals and for the rest of the competition. Bring it home!