Activist probably was never on Lebron James agenda, but he recognizes how much his culture needs him and he isn’t shying away.

James refuses to shut up and dribble. In fact, he’s speaking louder than ever on racism and inequality that has proven to be one of the biggest pandemics in the United States.

Racism has been around for nearly four hundred years and the Black community is fed up. So tired, that James is using his voice and platform to bring awareness to the incurable racial issues.

Just about every race around the world erupted two weeks ago due to the death of two Black men Ahmaud Abery and George Floyd who both lost their lives due to blatant racism.

Abery, was enjoying an evening jog on Feb. 23 in Brunswick, Georgia, when two white supremacists chased and gunned him down. Floyd died shortly after being handcuffed and pinned own by a Minnesota white police officer who clearly is racist on May 25th.

As the horrific death of Floyd sparked thousands of people to protest for black lives matter movement, James took to twitter to ask the world a question every Black person can relate to.

Basketball fans view James as one of the best to ever play the game of basketball but people of color look at him as our leader and protector during this tumultuous time.

Only if we had many more like-minded athletes like James that were willing to put everything at stake mainly endorsements the world would be in a better place today.

Instead we had too many athletes in 80’s and 90’s that did not embrace the black community and help fight the battle of social justice.

Why? Did multi-million dollar contracts and endorsements mean more to than racism? Go figure.

That’s a question we will have to ask Michael Jordan and Tiger Woods and that question will more than likely remain unanswered.

Though, Jordan did break his silence on June 5th stating: ‘I can no longer be silent.”

However, James has still been the loudest and bravest athlete in the room of any generation and that’s why he will not only be remembered as a basketball player but a black king who stood up for his brothers and sisters.

It still remains, no justice, no peace! 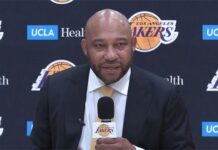