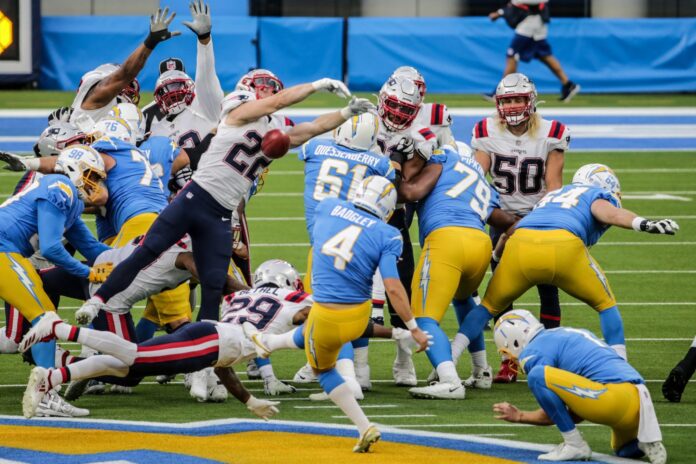 The Chargers kicker Michael Badgley recent troubles aren’t why the team cannot win a game, but field goals are just as significant as touchdowns.

Badgley had an unforgettable game Sunday night. He was unsuccessful in both of his field goal attempts and didn’t add any success to the Chargers 45-0 loss against the Patriots.

It was nothing short of a catastrophe- as Badgley and special teams scored one of the worst performances in NFL history.

The first missed attempt was a 46-yard field goal attempt, followed by a 56-yard attempt blocked- that led to a touchdown by Patriots Devin McCourty.

Chargers coach Anthony shared his thoughts on the unprofitable kicks after the game.

“It’s disappointing to go down on that first drive and miss that field goal for sure,” said Lynn. “Michael hasn’t been as consistent this year as he has in the past. So, if this continues, we may have to, but right now, that guy’s only here for insurance.”

Lynn was implying that Badgley is on the verge of losing his job to JJ Molson, who was added to the roster for insurance purposes only regarding COVID-19 related.

Badgley made two of the 11 mistakes that were made in the game. The attempts weren’t the only thing hard on the eyes- the entire special team’s unit was atrocious. And the Patriots capitalized off of most of their mistakes.

The Chargers special teams missed a field goal, allowed a 70 yard Patriots punt return touch down, had only 10 men on the field for return (twice), and a blocked field goal for Patriots touchdown.

“We may eliminate some of the coaching by committee for sure,” Lynn said. “I’ve been trying to decide this one if I want to just take it over. So, we’re going to something, but it’s going to be different. It’s going to be better than what you saw last night.”

Despite Badgley and the Chargers having a rough day, Lynn still believes he’s more than deserving of his head coach job.

“I’m the guy to get this back on the right track, said Lynn.” I’ve worked my tail off my whole life to get here. Yeah, I’m having a down year, and I understand people are going to be critical. That’s to be expected, but we have had some successes as well.”

In his defense, he has had some good memories with the Chargers, but will those good times outweigh the bad at the end of the season?