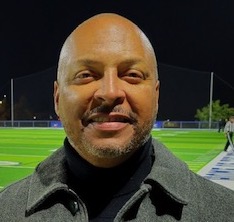 The Los Angeles Chargers and Los Angeles Rams played each other in an NFL regular season game for the first time since the opening of SOFI stadium in Inglewood, Ca. The stadium is home to both teams built by Rams owner Stan Kroenke, with the Chargers serving as the lessee. The stadium was a buzz on Sunday afternoon with fans celebrating the new year. As fans donned their blue and gold for both teams, it was an obvious Chargers home game as Bolt fans outnumbered the reeling Ram supporters. Two teams going in different directions on the field and in the standings. The Chargers clinched a playoff spot for the first time since 2018 last week with a 20-3 victory at the Indianapolis Colts. The Rams are coming off a lopsided 51-14 win over the Denver Broncos. The defending Champion Rams now 5-11 have been out of post season discussion for weeks. The Chargers are now 10-6, getting healthy at the right time and creating excitement for the playoffs. The Rams took a 3-0 lead with a Matt Gay 23-yard field with 1:09 remaining in the 1st quarter. The Chargers would take the lead and never look back at 13:09 in the 2nd quarter as Austin Ekeler punched one in from 10 – yards out. The big story for the Bolts was the return of defensive end Joey Bosa. Bosa has been out since week 1 with a groin injury. The Chargers pass rush with Khalil Mack and Joey Bosa was devastating in week 1 vs the Raiders as they sacked Derek Carr 5 times. The Bolts are looking to regain that vicious pass rush for the playoffs. The Bolts are also expecting to get their starting All Pro left tackle, Rashon Slater back next week from a peck injury. Slater will improve protection for Justin Herbert while adding a needed jolt to bolster the Chargers the running game. The Chargers were balanced on offense against the Rams rushing for 192 yards and passing for 239 yards. Ekeler had a banner day popping his longest touchdown run of his career (72 yards) and rushing for 122 yards on just 10 carries with 2 touchdowns. Mike Williams led the Chargers in receiving yards (7 catches for 94 yards) adding a spectacular one-hander on the Rams sideline right in front of Rams Coach Sean McVay. Chargers Keenan Allen pulled in 5 catches for 60 yards and Justin Herbert was efficient completing 21 of his 28 passes for 212 yards and two touchdowns. The Rams were led by Cam Akers who rushed for 123 yards on 19 carries. Baker Mayfield was under pressure all day long by the Chargers and was sacked three times. Mayfield was 11 of 19 and 132 yards. The Chargers defense was without their captain Derwin James due to concussion protocol. Linebacker Drue Tranquil stepped up to lead the Bolts in tackles (6 solo, 3 assisted) while Morgan Fox, Kyle Van Noy, and Sebastian Joseph-Day all registered sacks on Mayfield. The Chargers pulled key starters mid-4th quarter and cruised to a 31-10 victory. The Bolts travel to Denver next week to end the regular season. The Rams will finish a tough year on the road in Seattle. The Chargers have created momentum with their current 4-game winning streak and look healthy and poised for the playoffs. Although the jury is still out on Chargers Head Coach Brandon Staley, give him credit as he has the Bolts playing well at the right time.