It’s a cold wet evening in Washington DC at the midpoint of the annual Congressional Black Caucus and the City of Compton has a front row seat to the experience for the first time as councilmembers, school board members congregate to discover solutions to improve their city.

The primary reason why Compton decided to attend this conference at this time is because District 2 City Councilman Andre Spicer’s Liaison.

A Liaison is an assistant to the councilmembers, selected by the member and paid for by the city and responsible for scheduling appointments, events and also authorized to attend meetings on behalf of the council member.

Tene Spears also known as Tene Muhammad is the Liaison for Spicer who was seated in May of this year after being declared the runoff winner by one vote when the race was overturned following an election rigging scandal that prompted criminal charges against former two-term Councilman Isaac Galvan.

Spicer’s choice of Muhammad has turned out to be not just a very wise decision, but perhaps game changing during an administration transformation from former Mayor Aja Brown.

It was at the suggestion of Muhammad that every city council member, including the mayor and school board members attended the Black Caucus.

“It was important to be there because the Black discussion is a conversation about Compton,” Muhammad explained. “It was very informative, but it was missing Compton and it was also missing The Nation of Islam.”

However, she said the contingent was able to bring back some valuable information to Compton such as reform, mental health after attending so many workshops that included transportation and Black unions was also instrumental.

“So many phenomenal workshops, the only problem is that many of them were happening at the same time.”

Born in Santa Clara and experiencing living in just about every pocket of Los Angeles County, the single mother of four Muslim kids, Muhammad is committed to improving the lives of Blacks.

Admittingly, as a direct result of her conversion to Islam it is her life work and responsibility to make such a sacrifice.

Three of her children are grown, 27 year old daughter Jaali is in medical school; 20 year old son Hodari is attending a Nation of Islam engineering school in Chicago; 18 year old Almira is studying culinary arts in Detroit and 10 year old Shaakira is being home schooled.

Without enough hours in the day, Muhammad still finds time to produce Compton’s Black Exchange through her non-profit organization The Bridge Compton, a once monthly event in the city that galvanizes local Black businesses and customers aimed at forming allegiances for productivity.

“The purpose is the create spaces to connect and offer a condition to alter the racial wealth gap. We are the hands that people work with and want to have a safe space to get our dollars circulating among ourselves in Compton.”

This work is nothing new, she has been recognized as a figure in South LA and Compton since 2000, having advocated for the underserved residents in and out of her community.

As a community activist, she has worked with numerous organizations such as the Nation of Islam, Cease Fire, Mothers In Action, Mothers Against Violence, Operation Feed My Flock, The Game Changers and many others.

Muhammad has been working primarily in the city of Compton for the last 10 years. She is best known in the city for her role at The Hub Radio, an online platform. Initially volunteering her time, but soon advancing to engineering and producing shows. Today as Vice President and content curator, she has helped catapult The Hub Radio to one the most relevant and recognized radio stations in the region.

At the station she has helped to combine entertainment, politics and activism on a community platform to stimulate participation in young people and those at risk, where it didn’t exist before.

She also identified several years ago the need for bridge building between the community and law enforcement.

The climate of distrust and strained relations between law enforcement and the community is one that Muhammad has helped sooth as a fixture in the dialog for equity and justice. She has orchestrated numerous meetings with The Sheriff, LAPD, the Los Angeles District Attorney’s Office, The Civilian Oversight Commission, The Police Oversight Commission, Law Enforcement from other states and community leaders.

One of the most significant pieces of her journey has been her work with Compton Sheriff Deputy Daryll Harkless over The Youth Activities League (Youth & Law Enforcement), The Community Academy (Educating the community about law enforcement), her work with Pastor/Compton Sheriff Deputy Rafer Owens, The 7Pillars of Community Leadership Training (Changing Police Officers Standardized Training *P.O.S.T ) and forming The Bridge Compton.

“My children are my motivation! They are why I push every day for change in our community. And, not just any ole change, but change for the better!” 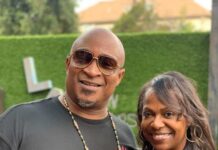 Black Women Return to The Throne