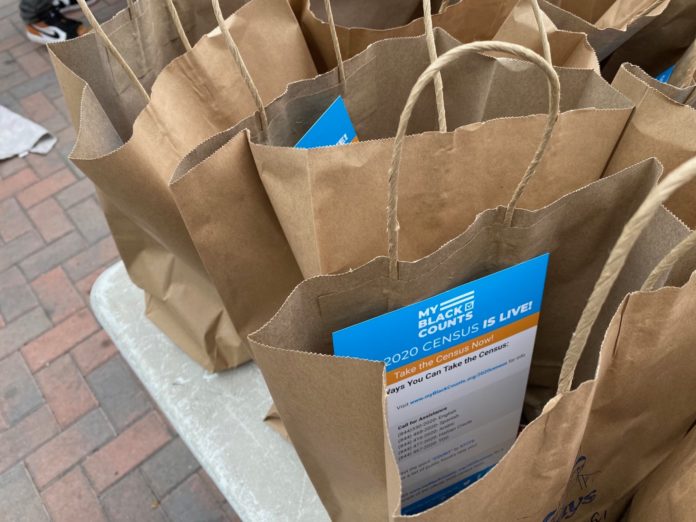 Census Day 2020 came April 1. The global coronavirus pandemic was worsening. It had already forced social and economic shutdowns across America.

Since then, all the major African-American community-based organizations, political leaders and other advocates in California — concerned that there may be an undercount of Black Californians during the 2020 census count — have found themselves grappling.

Under a statewide shelter in place order, those groups have been working overtime, rejiggering outreach strategies from a boots-on-the-ground game to expanding online get-the-word-out campaigns — most of their social media content identifiable by the hashtag #MakeBlackCount.

Their goal, leaders say, is to ensure every Black household in California accurately completes its 2020 Census form.

Their hard work is paying off.

So far, California has a 53.8% response rate, which is higher than the national response rate of 52.4%. The state is on good footing at this point, considering that this is still the first phase of the national count, and census workers have not yet even begun to conduct in-person, door-to-door data collection campaigns. About 47.8% of participants in the state have responded online, according to the U.S. Census Bureau.

“Up and down the state, most of the groups we’ve reached out to told us that they have had to step back and reimagine how they can best get their message to those African-American families and individuals who live in our hardest-to-count communities,” said Regina Wilson, Executive Director of California Black Media and a member of the California Complete Count committee.

“It is not business as usual,” Wilson continued.  “To be successful during this crisis, they have had to switch up their plans in real time. Its remarkable, but to achieve a full count of Blacks in the state, we have to keep that momentum up.”

“We understand there is still more work to be done to make sure all Californians, especially those who are hard to count, fill out their questionnaire. We are proud of the work our partners are doing to push these self-response rates,” said Ditas Katague, Director of the California Complete Count – Census 2020 Office. “We’d like to remind everyone that filling out the Census form will help bring needed representation and resources to California’s diverse communities.”

COVID-19 prompted the Census Bureau to prioritize an online count; and caused the California governor to issue a statewide stay-at-home order for everyone except essential workers — or people going out to pick up medicines, shop for groceries or fill up their cars with gas.  Having to adhere to a 6-foot physical distancing mandate between people, per Centers of Disease Control and Prevention (CDC) guidelines, has also influenced how census informational campaigns are being executed.

But advocates say they are now more determined than ever to work for a complete count.

Many rely on social media and web-conferencing events and they emphasize that the confidential, simple 9-question Census questionnaire can be completed quickly online at my2020census.gov, and by phone in English and other languages at 844-330-2020.

The U.S. Census Bureau has been sending paper forms to households that haven’t responded to the Census.

“Just think about Head Start and Meals on Wheels, and after-school programs.  That’s all dependent on getting everybody counted,” said Cassandra Jennings, president and CEO of the Greater Sacramento Urban League. She held a Celebrate Census Day Facebook live stream with Sacramento Mayor Darrell Steinberg on April 1.

The Census Day celebration in Sacramento is just one example of many others that happened in regions of the state with the highest African-American populations, including the Los Angeles area, the Inland Empire, the Bay Area, the San Joaquin Valley, the Central Coast and greater San Diego.

Jennings’ virtual event featured an interactive social media challenge. Participants tweeted about completing census forms on Instagram or Facebook, then tagged 10 of their friends.  “Let’s challenge each other to complete the census, not tomorrow, not the next day, but on Census day April 1,” Jennings invited people online to participate.

Earlier this month, California Black Media (CBM) released “Counting Black California – Counting the Hard to Count.” The Sacramento-based organization updated its comprehensive report identifying areas in the state where African Americans are least likely to be counted by the 2020 Census. The study includes an easy-to-use, online interactive map scalable down to the street level with those hard-to-count tracts highlighted.

Although the coronavirus crisis has forced community-based organizations doing census outreach work to adjust, they are coping, said California community leaders and advocates across the state like Janette Robinson Flint, founder and executive director of Black Women for Wellness (BWW) in Los Angeles.

Its civic engagement program hired workers before the March 3 general primary elections. They went door-to-door and set up tables at grocery stores and public spaces to educate canvassers about including census awareness in their get-out-the-vote campaigns.

“My fear is that it’s going to be a serious undercount as a result of the coronavirus. At a community level, we just simply can’t afford to be undercounted,” she said.

Robinson Flint said the key is for organizations to be nimble enough to switch up their ground games in communities to reach people online and by other means.

Her organization is now relying on texting and social media and, in the process, studying the technological capacity of their community.

Robinson-Flint says adjusting to a digital strategy has its challenges too, like unpredicted costs.

“A lot of people have smartphones, but if you ask them to text a thousand people, then that’s difficult for them in terms of how much it would cost,” Robinson Flint said.

Because of the COVID-19 crisis, the U.S. Census Bureau has adjusted its enumeration timeline. Field activities, which were scheduled to begin March 1, will not start until June 1. The bureau also warned that those dates and the processes associated with them might change, too.

“In-person activities, including enumeration, office work, and processing activities, will incorporate the most current guidance from authorities to ensure the health and safety of staff and the public” the bureau announced on its website.