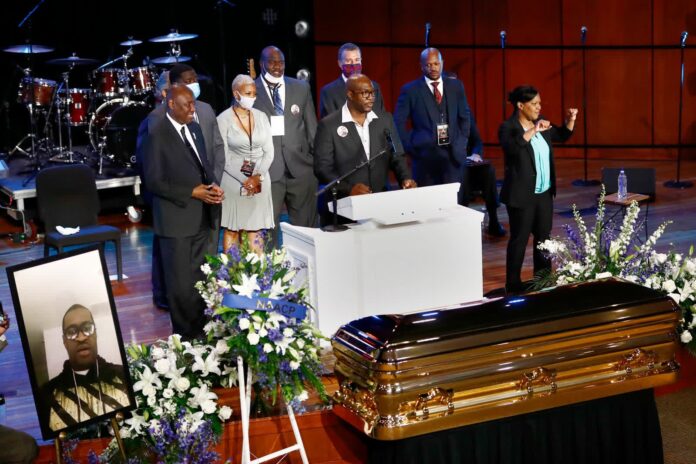 2020 will also be recorded in the City of Inglewood’s historical record as the most reconstructive in the city’s history.  Under the leadership of Mayor James T. Butts and a synchronized city Council, the city has ushered in changes, economic development and landmark structures that re-position Inglewood as the diamond in the South bay.

In one of the final city council meetings of 2020, as the council members adhered to rigid social distancing seating and said farewell to outgoing Council Member Ralph Franklin and City Clerk Yvonne Horton, the mayor introduced a City of Inglewood 2020 in Review Video that provided a comprehensive overview of the city’s progress during one of the most difficult years in our region’s and our nation’s history.

Despite a worldwide pandemic during most of 2020 the City of Inglewood managed to post accomplishments that position our city as one of the most enviable one’s in Southern California. 2020 was filled with many political upsets, the most important of which was the victory of President-elect Joe Biden and Vice President-elect Kamala Harris. The local political landscape was also changed with upset victories for Holly Mitchell to the Los Angeles County Board of Supervisors and George Gascon to the position of City of Los Angeles District Attorney, while the death of George Floyd, at the knee of a Minneapolis Police officer, re-kindled and energized the Black Lives Matter Movement, domestically and internationally.

While it is customary to remember the lives of those we lost during the year, particularly those in the public eye, 2020 has ushered in not only the loss of public figures whose names we all recognize, like Kobe Bryant and Little Richard for example, but also the lives of the hundreds of thousands of lives who may have been saved if we had a federal response by a responsible president that set the tone for how to manage a deadly pandemic.

Philonise Floyd speaks at a memorial service for his brother George on June 4. He said George had “touched many hearts” and that the audience in Minneapolis was a testament of that. “Everybody wants justice, we want justice for George,” Philonise said. “He’s going to get it.” Derek Chauvin, the Minneapolis police officer who kneeled on Floyd’s neck for eight minutes and 46 seconds, was fired from the department and eventually charged with second-degree murder. (Julio Cortez/AP)

Donald Trump who as of this writing has failed to acknowledge defeat for the office of the president will be remember for those who revile him and those who seem to worship him. Our current president obstructed special counsels’ investigations of his wrongdoing, pushed foreign officials to dig up dirt on political rivals, fired inspectors general who find corruption, ordered the entire executive branch to refuse congressional subpoenas, flooded the Internet with fake information about his opponents, refused to release his tax returns, accused the press of being “fake media” and “enemies of the people”, and continues to make money off his presidency. Almost half of the electorate voted for his reelection and he was soundly defeated but he continues to lie about the results of the election without a shred of evidence – and yet, according to polls, be believed by the vast majority of those who voted for him.

But Congress – a co-equal branch of government under the Constitution – cannot rein in rogue presidents. And the courts don’t want to weigh in on political questions.

The appalling reality is that Trump may get away with it. And in getting away with it he will, curing his presidency and in 2020 in particular, have changed and degraded the norms governing American presidents. Nothing will correct this unless or until an overwhelming majority of Americans recognize and condemn what has occurred.

Thank goodness 2020 is almost over.