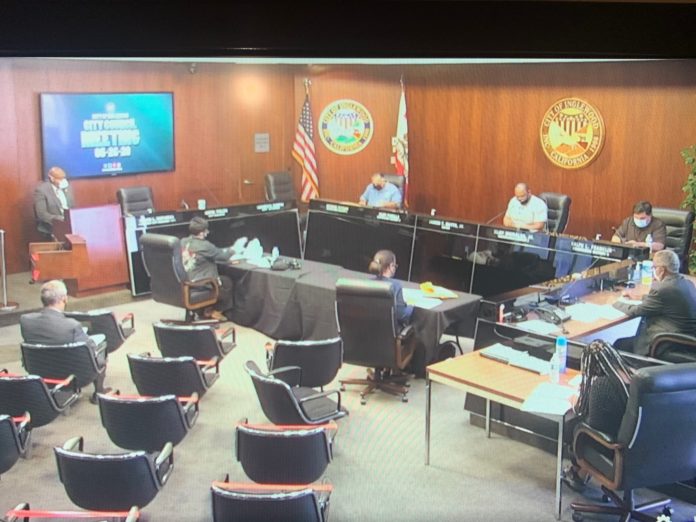 During this week’s short city council meeting, continuing without the presence of community members in deference to the social distancing imposed by COVID-19, the council approved an initiative by Mayor James T. Butts, Jr., recommending adoption and approval of Executive Order No. 20-04 extending eviction protections to residential and commercial tenants through June 30, 2020.

The council set future public hearings to consider an ordinance amending the Inglewood Municipal Code to establish policies for Short Term Rentals and another to consider the adoption of a resolution affirming Categorical Exemption EA-CE-2020-036 and approving General Plan Amendment 2020-001 (GPA 2020-001) to adopt an Environmental Justice Element for the Inglewood General Plan.

The Council adopted a resolution affirming Categorical Exemption EA-CE-2020-037, and approving General Plan Amendment GPA 2020-002 to amend the Land Use Element of the Inglewood General Plan to clarify existing population density and building intensity allowances for all land use designations.

As a result of a staff recommendation, the council approved an amendment to Agreement No. 20-032 (the California Cities Gaming Authority Joint Exercise of Powers Agreement) to admit the town of Colma.

The council adopted a resolution amending the Fiscal Year 2019-2020 Annual Capital Improvements Program Budget for the ITS Phase IV Project to include funds in the amount of $568,785.43, to be funded from Measure R Highway Program Funds.

The council approved the Fourth Amendment to CEQA Funding Agreement No. 18-055 with Murphy’s Bowl to include an additional $96,133.59 to cover costs of certain Legal activities and services (Phase II) provided by third party consultant at the request and on behalf of the City with regard to the proposed development of a National Basketball Association Arena and associated facilities (Project) near the intersection of Prairie Avenue and Century Boulevard; necessary to provide certain environmental and legal services on behalf of the City as required and/or contemplated by the Exclusive Negotiating Agreement

City Treasurer Wanda Brown alleged a gross misappropriation of Public Funds and called for a thorough investigation of the $195,983 associated with her assertion.  Mayor Butts later confirmed that the order to extend medical coverage to council members was a lawful ordinance.

The council members in attendance all urged everyone to remain safe and have a good weekend.

Mayor Butts closed the meeting after announcing that over 1,000 persons had been tested for COVID-19 including the city staff at the Forum Testing site. He and his council colleagues are considering the extension of modified restrictions in the City of Inglewood but explained that, as of now, the City will resume operations on June 8, 2020.