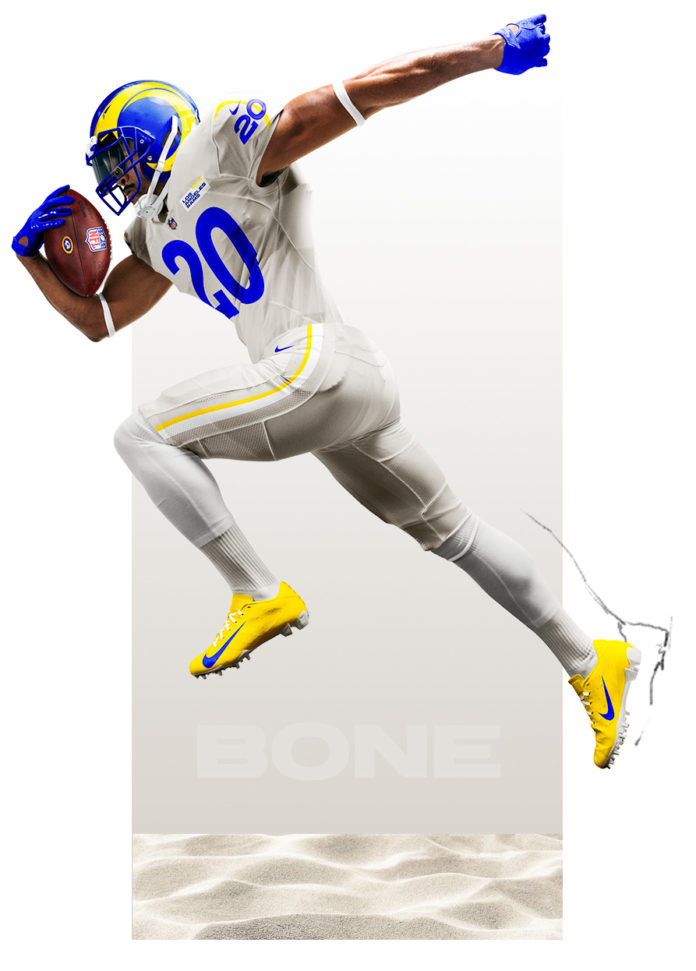 As the Los Angeles Rams prepare to open SoFi Stadium this fall, they usher in this next era with the launch of their new uniforms. The Rams are introducing three uniform combinations that draw inspiration from their history and their hometown of Los Angeles.

“SoFi Stadium is an iconic, transformative stadium that encouraged us to design uniforms as innovative as our new home,” said Los Angeles Rams COO Kevin Demoff. “Our new uniforms preserve the storied legacy of the Rams with the horns at the heart of the design, while introducing vibrant colors and groundbreaking materials. We are proud to unveil a modern look for our players to wear as we begin this exciting new era for the Los Angeles Rams.”

Honoring the team’s legacy, the iconic ram’s horn remains the focal point of the new look. Reminiscent of the original 1948 “golden-horn helmet,” the first NFL helmet to feature an emblem, this new helmet features vibrant colors, a metallic finish, and an evolved horn shape. This modern take on the horns brings the horns forward into the next era of Rams football. This horn also appears on the team’s capped sleeves.

From design to color to fabrication, the Rams collaborated with Nike Global Identity Group and the National Football League.

The color uniform includes a monochromatic look of a vibrant, royal blue, as well as a set featuring the royal jersey paired with a yellow pant. The lighter uniform introduces a first-of-its-kind color called Bone, which reflects the color of an actual Rams horn and the beaches of Los Angeles.

Design highlights include a gradient on the royal jersey’s numbers and pant stripe to honor the horn’s color evolution over time from white to yellow, as well as a unique reflective application on the numbers and pant stripes of both the royal and bone uniforms. Both jerseys feature front patches, with a Rams wordmark logo on the royal jersey and three-stacked Los Angeles Rams wordmark on the bone jersey. In addition, there is a back-neck tag showcasing the ‘L.A.’ monogram logo balanced with the rams head logo inside the neckline.

The Rams will introduce the uniforms through unique, virtual experiences providing an opportunity for fans to engage with the new look. The Rams are unveiling their uniforms through a custom-created Snapchat augmented reality Lens, featuring the ability to trigger players into action. The AR uniform reveal is a first for any NFL team, and for Snapchat.In addition, the team has collaborated with EA Sports’ Madden NFL franchise to offer a sneak peek of the uniforms in action. The uniforms will come to life through in-game renders of Rams players showing off the new look. Fans also will see the uniforms highlighted at SoFi Stadium through interactive content on Instagram.

Timed to the launch, the Rams are surprising more than 5,000 members of the Los Angeles community with new Rams “LA Together” t-shirts, which feature elements of the new jerseys, as a thank you for their dedication to the community.