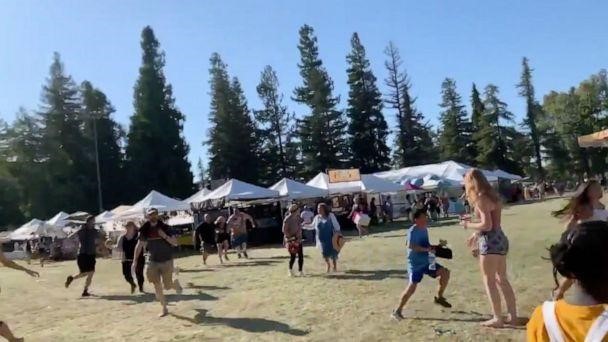 At least three people, plus a suspect, died after a shooting at the annual Gilroy Garlic Festival in California. !7 were injured as a result of the attack inflicted by an AK-47 style assault rifle.

The incident was reported at 5:41 p.m. local time, with multiple ambulance units also responding, police said. Officers engaged with the shooting suspect within a minute of arriving, shooting and killing him.

A law enforcement official said that authorities believe they’ve identified the dead shooter and are searching for that individuals potential motive in the attack. Officials also are investigating whether there were multiple suspects.

Dozens were sent to the hospital following the shooting. A Santa Clara Valley Medical Center spokesperson said conditions of those admitted to medical facilities ranged from fair to serious.

Gabriel Palacios, who lives in Mexico and was visiting, told a reporter his 12-year-old cousin was among those shot.

Palacios was with a large group of family, about 30, when he and his cousins ran after hearing the shots, at one point turning around and seeing his young relative with a bullet wound in her leg.

“She was hurting a lot,” added Palacios, who said a family member drove her to the ambulance.

Steve Janisch, a pyro chef at the festival, said he was cleaning up and getting ready to leave when the shooting began.

“I heard the shots, and got as many [of] as my guys, and got behind shelter in the alley,” Janisch re[prted. “I saw many people running in fear. Once we rounded everybody up out in the parking lot, we headed out per the direction of the authorities. I drove a mother and her two daughters safely to their car.”

Gilroy, a town of about 50,000, is approximately 30 miles southeast of San Jose.