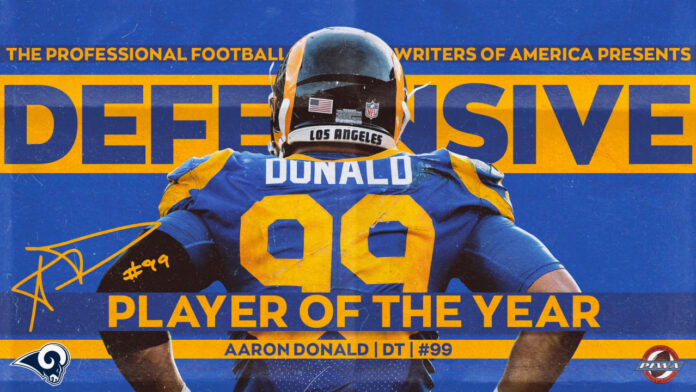 Rams defensive lineman ﻿Aaron Donald﻿ has been named the Pro Football Writers of American (PFWA) 2020 Defensive Player of the Year, the organization announced this week.

This marks Donald’s second time receiving the award; he also earned it following his record-setting 2018 season.

Donald finished the 2020 regular season tied with the Saints’ Trey Hendrickson for second in the NFL in sacks with 13.5, bringing him to 85.5 for his career – two shy of tying outside linebacker Leonard Little’s franchise career record of 87.5.

In addition to those 13.5 sacks, Donald also tallied 45 total tackles, four forced fumbles, one fumble recovery and one pass breakup while playing in all 16 games.

Donald was named to the PFWA All-NFL and All-NFC teams.