The Chargers will not see the home of their new SoFi Stadium confines until week two of the NFL season, but when game one scheduled on the road against the hapless Bengals in Cincinnati it is safe to say that all eyes will be on the defense.

This will be the first game for the Bolts since the face of the franchise quarterback Phillip Rivers was let go and has landed in Indianapolis with the Colts.

However, not much point production is expected from an offense that will likely be without receiver Mike Williams in the week opener.

In the meanwhile, a defense anchored by defensive end Joey Bosa is even thinner after star safety Derwin suffered a torn meniscus in camp and will likely miss all of 2020. With James out and wide receiver Mike Williams is questionable for Week 1 with a shoulder injury the Chargers may be fortunate to leave Ohio with a victory.

Tyrod Taylor takes over under center and will not have to look over his shoulder like he did in Cleveland waiting for baker Mayfield to assume the helm.

The hope here is that he regains the form he had while playing for the Bills when Buffalo ranked 10th in offense, but anything short of that and this could be another season looking up from the AFC West basement.

This COVID-19 season has handicapped every team in the league and particularly hurts a team like the Chargers which will rely on young players on defense such as linebacker Kenneth Murray.

Coach Anthony Lynn will have his work cut for him in this strange and crazy new normal that likely will prevent fans from seeing the team in person, but management will have a watchful eye on him and his staff if things unravel and the local tenant emerges as a Super Bowl contender.

This is not a team expected to beat the Chiefs, but in their Inglewood introduction they desperately need to win over some fans that will eventually be allowed to watch them play. 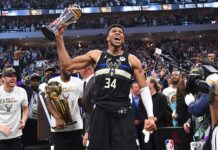