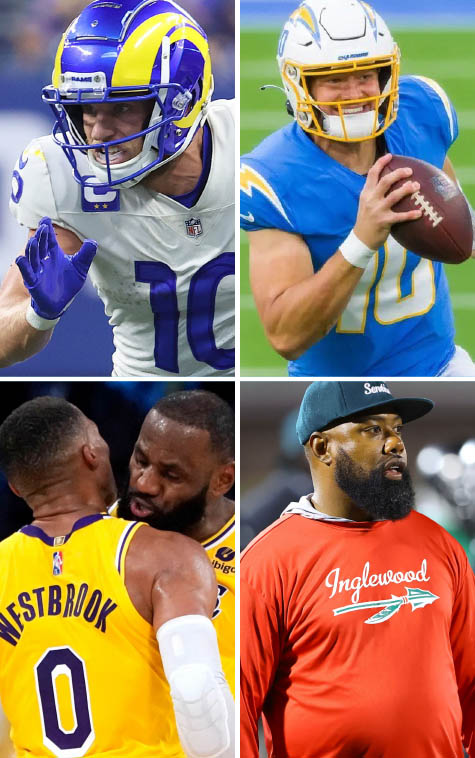 Sounds like a Donald Trump sound bite, but although the untruth slayer has been voted out of the Oval Office, 2021 under Biden was the beginning of clean up on aisle 46, thus the impact of the COVID-19 pandemic has altered the sports landscape in ways unimaginable.

Let’s start with the two NFL tenants of SoFi Stadium which began 2021 with high hopes and Super Bowl aspirations in ’22.

The Chargers moved on from Anthony Lynn by raiding the Rams for Brandon Staley, a proposed defensive mastermind.

Lynn landed on his feet as OC for the hapless Detroit Lions while Staley was brought on to prevent the late game collapses of yester year and put the Justin Herbert led Chargers on the path to long term success.

In year two Herbert continues to shatter club records and has clearly cemented himself as the face of the franchise, Staley has somewhat demonstrated that he is a very capable defensive mind, but the Chargers stand on the outside of the AFC Wild Card with just two games remaining.

It’s really a shame if the Chargers waste a Herbert season in which he is second only to the GOAT Tom Brady in passing.

Herbert has thrown for 4,394 yards including 33 touchdowns against 14 interceptions.

The Bolts at 8-7 will likely miss the playoffs for the second consecutive season putting a damper on the prospects for the fan base in ’22.

Meanwhile the Rams flipped Jeff Goff for Matthew Stafford and clinched another post season berth and possibly the division and an opening home playoff game.

Stafford has slung for 4,339 yards, 36 TDs and 13 INTs, but he has done very little in helping Rams fans forget about the ineptness of Goff.

In fact, Stafford could prove to be worse when expectations could not be higher.

This is a Super Bowl or bust Rams team, but anyone who has illusions that the Rams could beat either Green Bay or Dallas in a conference e title tilt the way both teams are playing now are dreaming.

Not with a defense that ranks near the bottom of the NFL in most categories and an offense that relies so heavily on the abilities of Cooper Kupp, who leads the league in receiving with 1,734 yards on 132 receptions and 14 touchdowns, that the probability of the team winning a game without him is remote.

Our pro basketball teams are just a mere shadow of themselves.

The Clippers began the year without Kawhi Leonard and has now lost Paul George. This team will NOT contend for an NBA title and could miss the playoffs entirely.

I love Tyronn Lue and his ability to make the proper adjustments to keep this team viable. I just don’t believe that he has enough talent on the roster to get it done.

As for the Purple and Gold and Lakers Nation, it looks rather bleak doesn’t it?

Anthony Davis has gone down again, Lebron James is struggling to mentally figure it out. Russell Westbrook is just Rus, but the fit on the team chemistry wise has not materialized. At least yet.

I will bet on LeBron James, mentally the most brilliant mind in the history of basketball to figure it out.

Once he does, I’m still not sure that this team can win a title as constructed, but they will scare the living daylights out of anyone who draws them in the playoffs.

On the high school sports scene, ’21 will be the year that Inglewood High School burst onto the national scene for all of the wrong reasons.

Beating Morningside 106-0, brought about a level of castigation towards Inglewood and coach Mil’Von James that was unrivaled.

Not even Mater Dei football hazing that resulted in a player suffering a head injury received as much press.

The CIF Commish issued a scathing rebuke of Inglewood, but deferred Mater Dei’s situation back to the powerful private Catholic school in Orange County.

Was the Inglewood bashing of Morningside bad? Yes!  Was it bad sportsmanship? For sure! But what happened at Mater Dei was criminal. Clearly two cases where white is right and attack Black is the trend…

What’s left of the bowl games will fill your appetite as ’22 comes in a rush.

I like Michigan to win it all in CFP.