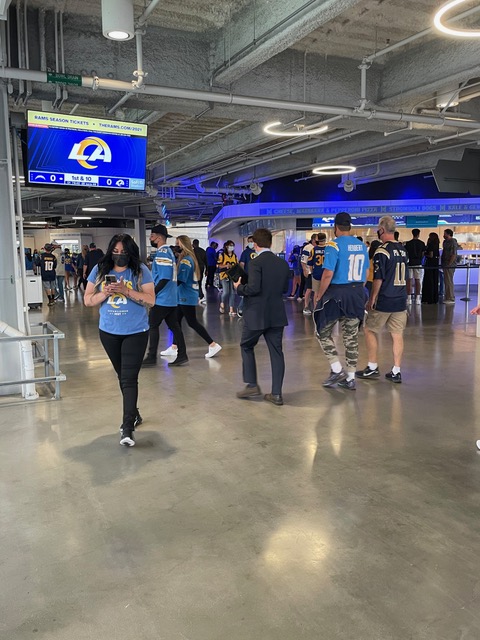 NFL football is officially underway, and for impassioned Chargers and Rams fans the preseason debut on Aug. 14 at SoFi Stadium was been a long time coming.

The monumental evening marked the first time that football fans were able to bask in the luxury of the brand-new, 70 thousand-seat, state-of-the-art stadium which is home to Rams and Chargers.

Excitement filled the air for those who were in attendance for the matchup. The highly-anticipated SoFi Stadium has been in operation since September of 2020, but the COVID-19 pandemic prevented the opening of its doors to the public during the 2020 NFL season. For nearly a year, many Inglewood residents have been counting down the days until they can finally reap the benefits of the multi-billion-dollar, revolutionary stadium residing in their own backyard.

Eager spectators filed onto Hollywood Park ground, many who seized the opportunity for a tailgate party with loved ones as part of the pre-game festivities. Some dressed head-to-toe in Rams gear, some in Chargers gear, and some were divided households of half-and-half.

“I’m super excited to see the finished product and what all it offers, not only the beauty of the aesthetic, the water and everything, but I want to see the shops, the restaurants, and everything else. I’m excited. I see the NFL Network building next to it. So, I can’t wait. And actually, to be honest with you, I’m more excited about just being inside of this great, almost six-billion-dollar monument of a stadium than I am about the actual game,” says Dimetrios Vandiegriff, an Inglewood resident of nearly two decades.

Other pre-game festivities included the entertainment stage that sits in the middle of American Airlines Plaza, the open-air space just steps outside of the stadium entrance. An hour before kickoff, the stage featured a performance from Rams cheerleaders, along with a DJ and other interviews. Attendees danced, ate, drank, and took photos with Rampage– the official Rams mascot.

As for the game itself, the Chargers got the win. And as many of both team’s starters remained sidelined, it was an opportunity for certain rookies and less-established players to make a statement and solidify roster spots for the season.

Regardless of many predicted-starters not being on the field, the crowd remained electrified all throughout the night. Every catch seemed to earn a roaring applause, as if it was simply a relief to have something to cheer about after nearly two years­– and counting­– of pandemic anguish and uncertainty.

This weekend both the Rams and Chargers will play at home, with the Rams playing on Aug. 21st against the Raiders and the Bolts hosting the 49ers on Aug 22nd, respectively.

Darious Williams finally gets his shot