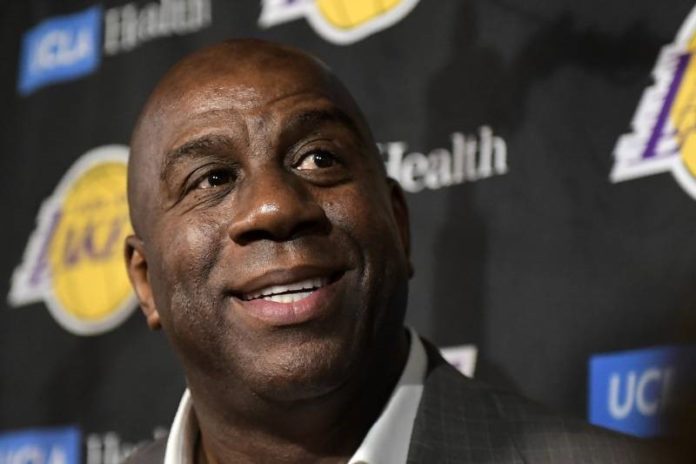 A common theme was repeated by devastated Lakers insiders Monday in the wake of Magic Johnson’s franchise-leveling rant on national television.

The rhetorical question struck to the heart of a truth that must be addressed if the Lakers have any chance at fixing their busted front office.

Johnson professes his love for the franchise, yet acts in ways that demoralize it.

Johnson could be their best ambassador, yet he has become their most visible critic, and this summer that could seriously affect their ability to attract free agents.

The Greatest Laker has become The Grating Laker, adding to the dysfunction that he’s attempting to reveal.

Make no mistake, Johnson’s words have value, his viewpoint is important, he’s telling his truth, and Lakers fans should listen. Yes, Jeanie Buss has lost control of the room. Yes, Rob Pelinka is not a respected leader. Yes, the team is being guided by too many voices with too few credentials.

Johnson is an incredibly credible witness. But he’s no hero here. Where and how he’s choosing to testify doesn’t make him noble, it makes him selfish.

“That’s who I’m always going to be, is a person who will be up front,” Johnson told The Times’ Broderick Turner this week.

But there is a difference between up front and out front. Twice in the last six weeks, Johnson has submarined the Lakers by being out front without being up front.

It was Johnson who first exposed the Lakers’ front-office feud by firing the first public shot when he resigned from his president’s gig while standing in a Staples Center hallway before the final game of the season.

He constantly says he considers Buss his sister, but would you quit your sister’s team without telling her?

Then, of course, it was Johnson who pulled back the curtain on the Lakers’ leadership wreckage Monday morning just hours before the Lakers were scheduled to begin patching some holes by formally introducing Frank Vogel as their new coach.

Coincidental timing? Not a chance. While Johnson’s “First Take” television appearance had been scheduled a couple of weeks in advance, the Lakers news conference had been on the books for a week, so Johnson could have rearranged his calendar to fire his shots at a different time. It’s hard to imagine a TV sports talk show that wouldn’t change its schedule to accommodate him.

In both cases, Johnson deftly picked the time when the spotlight would shine brightly on him while casting a deep shadow on the Lakers. It was as if he wasn’t satisfied with exposing a bad situation, he wanted to make it worse. He felt wronged by Pelinka, and he was going to make the entire organization pay.

That sort of vindictive and vengeful attitude is unbecoming of a man universally beloved for his generosity and joy. The smirk is ill-fitting on a face known for its smile. He is not only damaging the Lakers’ legacy, he also could be tarnishing his own.

He has famously done this before. As a player in 1981, he told Jerry Buss he no longer could play for then-coach Paul Westhead. When Buss didn’t dismiss Westhead immediately, Johnson publicly demanded to be traded and Westhead was fired the next day.

In that case, Johnson’s methods worked, the end result was the installation of Pat Riley as the coach and the rest is Showtime history.

But this is different. This time, Johnson publicly aired his complaints about Pelinka without first bringing them to Jeanie Buss. And this time, he’s not just taking on a coach; he’s intent on embarrassing an entire organization.

If Johnson’s accusations lead to a massive basketball operations overhaul — and that should happen if the Lakers get shut out of any top free agents or big trades this summer — then he will be credited with a victory. But it will be a costly win, as his words already have turned the vaunted Lakers brand into a league-wide laughingstock.

Johnson could have effected change without quitting his job. He could have discussed his issues without blowing up the Lakers’ news conference.

He could have kept driving the bus without throwing so many people underneath it, particularly those from the business side, which is the one area of the franchise that actually works.

Even with all of his criticisms, Johnson forgot to mention what could have been his most compelling one. He should have ripped Jeanie Buss for hiring him as president in the first place.

When Buss enlisted him shortly after she took control in February 2017, once again relying on family and friends to run her basketball team, it was her first and biggest mistake.

It was suspected that he wouldn’t have time for the job. It was guessed he was too big for just the Lakers, too busy to do the little things that the job required, yet too stubborn to ever acknowledge it.

Every single fear came true. With the exception of the signing of LeBron James — who really did fall into his lap — he wasn’t a great president of basketball operations. But, more pointedly, as many predicted, he wasn’t a completely engaged and invested president.

This was always going to end badly, but nobody had any idea it would end this badly, and now what do the Lakers do with him? How do they handle this massive and influential presence that will forever remain in their orbit?

They can’t rip him, he’s Magic Johnson. They can’t praise him; it would be like ripping themselves. They can no longer invite him into the room to recruit free agents; nobody will believe his pitch. But then again, how do they keep him out of that room without him going on television to complain about it?

He and Jeanie Buss have met for several infamous dinners in the past. They need to meet again and figure this out. She needs his wisdom, but she also needs his discretion. He needs to listen, but he also needs to know she is listening.

Buss basically needs to tell him, “Look, you’ve said your piece, I get your point, give me until the end of summer, one way or another, this will be fixed.’’

And with that, Magic Johnson needs to zip it.