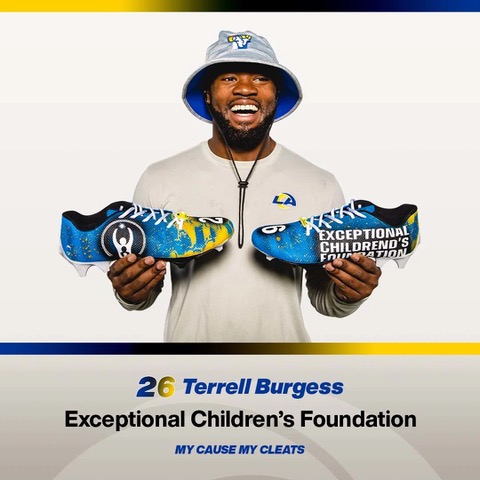 As the Los Angeles Rams took on the Jacksonville Jaguars at SoFi Stadium in Week 13 of the NFL season, Rams players also claimed it a day for charitable causes. In honor of the “My Cause My Cleats” campaign, for the sixth consecutive season, players across the league had the opportunity to bring awareness to a charity closest to their heart by wearing the name on their cleats.

This year, in Week 13 and Week 14 of the season, more than 900 players around the league will participate in uplifting and highlighting nonprofit organizations and causes. Some of the chosen organizations included the American Cancer Society, the Exceptional Children’s Foundation, the NAVY Seal Foundation, Boys and Girls Club of America, RISE, and more.

Los Angeles-based designer Miguel Montenegro and artist Sean Vergara teamed up with the Rams organization to customize cleats for players and coaches who are participating in the campaign. Rams players and coaches will have the option of auctioning off their cleats after the game, where 100% of the funds raised will go towards the selected charities.