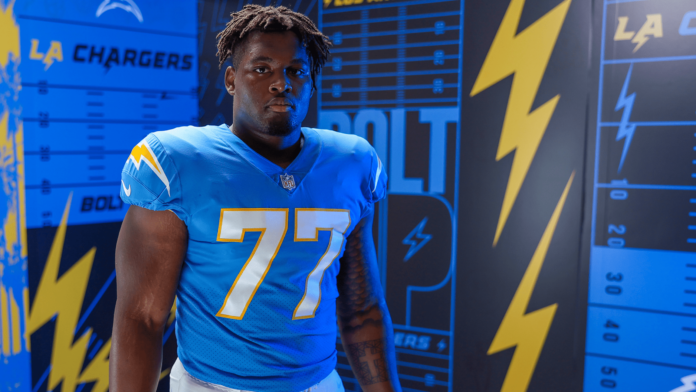 By Hayley Elwood, The Chargers

Throughout the 2022 season, we’ll be checking in with Chargers players:

Next up, is Zion Johnson.

After the Bolts selected him No. 17 overall in the 2022 NFL Draft, Johnson plugged in as the team’s starting right guard and hasn’t looked back.

Here’s more from No. 77 on what the transition to the NFL has been like, communication on the offensive line, working the right side with Trey Pipkins III, and more.

You’re a few weeks into your first season in the NFL. How’s it been going for you?

Johnson: We’ve gotten to experience the highs, lows, wins, and losses. And my goal has always been to learn from every experience, try to get better as fast as I can, and try to help the team win.

What is the transition like from the draft, to the offseason program, to training camp, to games?

For those of us who don’t play, how much of it is the physical transition or the mental switch?

Johnson: I’d say it’s a lot of mental. It’s a very fast transition; you’re at the draft and next thing you know, you’re here for the offseason program. You have to learn the plays, get integrated with the team and learn to work with a new set of teammates.

Then, you get into camp and it’s live. The bullets are flying and you’re going up against other teams in joint practices, preseason, and next thing you know, you’re in the regular season.

The biggest transition is definitely mental, having to adapt and be ready at a moment’s notice. But you have a lot of support and people around you to help make that transition more seamless.

When you talk about learning and soaking up as much as you can, who on this team or maybe the line have been great resources for you?

Johnson: It’s hard to pick because they all have. Playing next to Trey, he’s done a lot to make me feel more comfortable and help me learn to become a better player and help us jell. Corey [Linsley] is the same way; he’s played a lot of football and has a lot of knowledge. He’s a guy that you can really bounce things off of that can help you.

The same thing goes for [Matt] Feiler, he plays the same position as a guard, so even more in specifics in terms of techniques and little things you can do to tweak your game, I can go to him for things like that. Then Rashawn [Slater] and even Jamaree [Salyer], a rookie, those guys do a lot to really help.

Anything surprise you about playing in the NFL?

Johnson: I would say the process. It’s not like college where every week is pretty much the same; you play on Saturdays, for the most part, you have different game times, but your routine is really the same.

And you’ve gotten a taste of that already and had games on all those days so far this season.

What’re you building with Trey on that right side?

Johnson: One of the things we try to stress with each other is just communication. If we’re on the same page, then we’re gonna be a lot better and more cohesive as an offensive line.

So really, just communicating, working our combination blocks together, building that trust in each other. When you have that trust with the guy next to you, it just makes things a lot more easy for you.

There’s obviously been some attrition on this offensive line throughout the season already and even in games.

What has that been like in terms of having to adapt and react, sometimes on the fly?

Johnson: I think it’s kind of a “next man up” mentality. That quality of communication that we’re trying to have doesn’t just extend to the players [who start], but [it extends] to everyone on the offensive line. It doesn’t matter if we have someone who usually doesn’t play or someone who’s been a vet for a very long time like Corey, we try to keep that same level of communication so we can play our best level of ball.

Do you guys do o-line dinners?

Johnson: Yeah, they are. You know, offensive linemen like to eat so that’s something that we bond together doing.

What’s been your favorite meal you’ve had so far?

Johnson: We went to a steakhouse in New Orleans. That was one of the dinners we did and it went really well and the quarterbacks came, too. We just were able to talk and eat some good food.

Do you rotate on who picks the place? Have you picked one yet?

Johnson: We rotate, but no, not yet. It’s coming.

Lastly, what are some of your goals the rest of the season?

Johnson: I mean, we just want to win. That’s the end all be all. When you look at the win column and see how many of those you have, that’s how you decide if you had a good season or not.

For me, just be putting my best foot forward in helping the team get those wins so we can reach our goals.