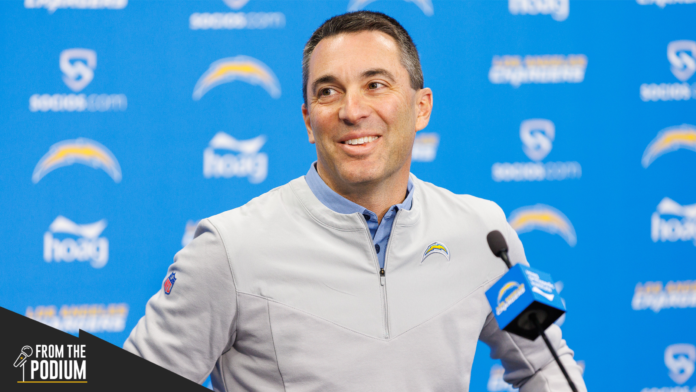 On April 25, Chargers general manager Tom Telesco spoke to members of the media about the Chargers’ mindset heading into the 2022 NFL Draft.

As it stands, the Chargers hold the 17th overall pick on Thursday, with their second selection being 79th overall in the third round of the draft. Telesco talked about the possibility of trading picks, whether it be trading up or trading down.

“We’re going into the draft with a first-round pick, and then a big gap until you get to the third [round]. I spend a lot of time going through scenarios and preparations, as far as what could happen, going up or down. Going up this year, without having a second-round pick, I don’t know if that’s really realistic. I don’t think we’ll have to, anyways.”

Telesco, who said he “feels good” about being at pick 17, explained what factors he has to look at when it comes to trading back to get a second-round pick.

“A lot of it comes down to who is on the board at that point,” Telesco said. “How far back do you want to go, how many players do you have left at that spot? There are a lot of benefits of moving down; you can pick up an extra pick, you may pick up an upgrade at the pick. You have to kind of weigh that versus who is there, and kind of remind yourself that we are not infallible, as far as talent evaluators.”

NFL mock drafts have the Bolts picking a variety of positions with their first pick in the draft. One route the Chargers could go in the first round is drafting an offensive lineman. Telesco talked about where his mindset is at when it comes to selecting an offensive lineman in the first round and if he feels a need to add to the o-line in the draft.

“We’ll just kind of see how it plays out,” Telesco said. “You never know how it’s going to go. A little bit like free agency, you can only bring in what’s going to be available — same thing with the draft, you can only draft what’s available. We certainly aren’t going to force anything. We have different plans in-house, different plans looking forward if it wasn’t from in-house. We’ll see how it plays out.”

One of the biggest questions NFL scouts have when evaluating a player is, can the prospect’s skill set translate to the NFL? Telesco gave some insight into how he works with the Chargers coaches and scouts to prepare prospects for the next level.

“If you do see a player that you feel like has all of the traits you need to project at this level, and you feel like he has the work ethic, the mentality, that drive and desire to be great, then you can work with that and you can develop them,” Telesco said. “We do have to be careful. We want to draft good college players, but those college players have to project to pro players, and sometimes there’s a difference there. That’s why we have coaches that go out there and work with these guys — put together all of the traits, see if the work ethic is there, then you roll the dice and see if it works.”

While the excitement around the draft has been building the last few weeks, the Chargers scouts are nearing the end of a 12-to-13-month process preparing for the draft, according to Telesco. Now just days away from the Chargers being on the clock, Telesco talked about what the days leading up to the draft are like.

“Most of our work is done,” Telesco said. “Now, it’s just really thinking through different scenarios. Yeah, I have a lot of things that go through my head for the two weeks leading up to the draft. Our scouts, our coaches, they do a great job with preparation. We’re really organized. It doesn’t mean that we’re going to get every pick right, but we’re really organized with the information. That really kind of makes you sleep relatively well at night.”

This year, the Chargers will be hosting a DraftFest party on Thursday with special guest Snoop Dogg at SoFi Stadium. Telesco, head coach Brandon Staley and the rest of the Chargers personnel will be making the first-round pick from the Chargers locker room. Telesco recalled drafting from his house for the 2020 draft and what the event means for him and Bolts fans.

“If I can draft from my dining room table, I can draft from anywhere,” Telesco said. “The stadium, we have a huge locker room, plenty of space…It will be kind of fun. It’s like a field trip. You go down to the stadium, make our pick and come back home for it. It’s something different to do. The draft is fun. It’s supposed to be fun. I know it’s our job, but for the fans and everybody involved, it’s something fun to do. It will work just fine at SoFi [Stadium].”