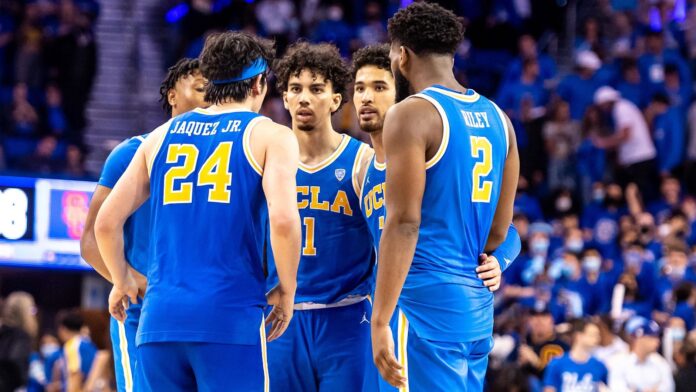 LOS ANGELES – The No. 4-seed Bruins will face No. 8-seed North Carolina in the Sweet 16 of the NCAA Tournament this Friday evening in Philadelphia. UCLA advanced to the Sweet 16, or regional semifinal, after recording victories over No. 13-seed Akron and No. 5-seed Saint Mary’s in Portland last week (Thursday and Saturday). The Bruins have won seven of their last eight games, heading into Friday’s contest in Philadelphia.

– The Bruins are seeking their second consecutive trip to the Elite Eight with a win against North Carolina on Friday.

– The Bruins finished second in the Pac-12 standings for the second time in the past three seasons (also, 2019-20).

– UCLA finished as the runner-up to top-seed Arizona at the Pac-12 Tournament at T-Mobile Arena in Las Vegas.

– UCLA has advanced to the NCAA Tournament for the 51st time in program history (second consecutive year).

– The Bruins had two six-game winning streaks during the season and lost in back-to-back games just once.

– Eleven of UCLA’s 15 players were either born-and-raised in Southern California or attended high school in the area.

– UCLA returns to the NCAA Tournament’s Sweet 16 after having gone 5-1 in last year’s 68-team field.

– The Bruins advanced from the First Four to the Final Four one year ago, losing in the national semifinals to Gonzaga.

– UCLA has made 51 total trips to the NCAA Tournament and has won a nation-leading 11 NCAA championships.

– Since the tournament expanded to 32 teams in 1975, UCLA has made 11 trips to the Elite Eight (regional finals).

– The Bruins have made 19 appearances in the Final Four (compiling a 13-6 record in the national semifinals).

– Head coach Mick Cronin has guided his teams to 13 NCAA Tournament appearances in 19 years as a head coach.

WELCOME TO THE SWEET 16

The Bruins have advanced to the NCAA Tournament’s Sweet 16 in back-to-back seasons for the first time since 2014 and 2015. Last season, the Bruins defeated No. 2-seed Alabama in a Sweet 16 matchup in the “bubble” in Indianapolis, 88-78, in overtime. That victory propelled UCLA into an Elite Eight showdown against No. 1-seed Michigan (UCLA won, 51-49). This Friday’s game will mark UCLA’s 22nd trip to the Sweet 16 since the tournament expanded to 32 teams in 1975. The Bruins have gone 8-3 in their past 11 trips to the Elite Eight (since the tournament began including 32 teams in 1975).