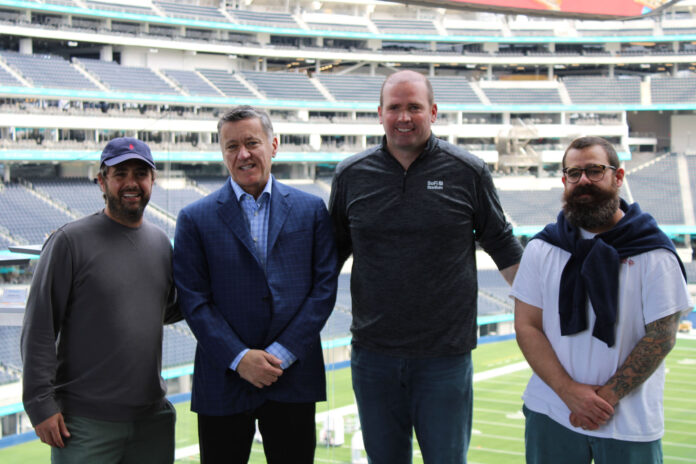 Under the name ‘LA Eats’ with food operator Legends Hospitality, chefs Jon Shook and Vinny Dotolo, also known in the Los Angeles food scene as ‘Jon & Vinny’, have teamed up with Inglewood’s SoFi Stadium to build a collection of delicious food menu items for the state-of-the-art Rams and Chargers stadium.

Menu items were revealed to the public for the first time on Wednesday, June 2, as a tasting event was held at SoFi Stadium for a limited number of community members.

Bill Wilson, Executive Vice President of Legends Hospitality, knew he had a large project at hand when beginning the mission of bringing the best possible menu to stadium goers.

“When we started this journey a few years ago, the goal of our culinary program was to create something that is as transformative as the building itself,” recalled Wilson when speaking about the initial steps of the process.

One of the things for certain: the food that will be served at upcoming Rams and Chargers games is superior to other stadium food across the country. Ingredients are fresh, recipes are trendy, versatility is near-endless, and the presentation is photoshoot-ready. There will be vegetarian and vegan options, and also modifications made available for those with allergy restrictions.

Great food should come hand-in-hand when spending an evening at SoFi Stadium. Chefs Jon Shook and Vinny Dotolo are making sure of it, and they’re honored to be the ones called to the task.

“It’s wild, as a young kid, to grow up loving sports, and then to now be here doing what we love, which is cooking– and to have this amazing stadium behind us,” says Dotolo.

While it may be the football games that bring sports fans into the doors of SoFi Stadium, great food will surely be an added bonus.

The Sweetie Pies We All Desire 60 years later 27th Street...