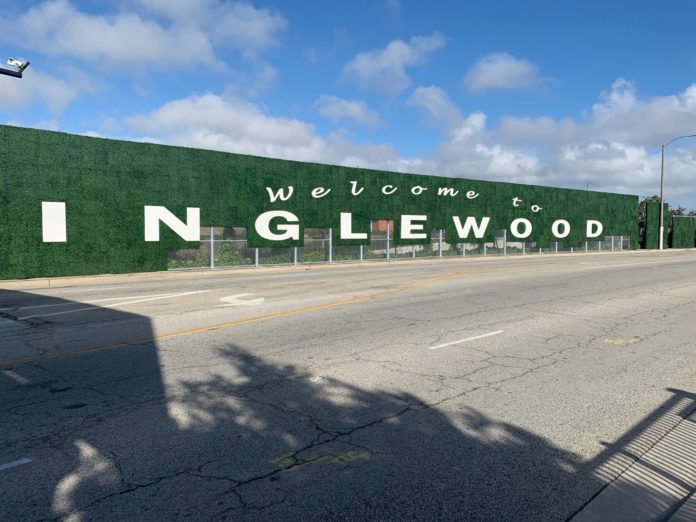 The City of Inglewood has a new sign that rivals the world-famous Hollywood Sign, indicating to everyone who sees it, including the countless tourists who visit Randy’s Donuts, that they have arrived in the beautiful City of Inglewood. The nearly block long sign, prominently displayed on La Cienega Boulevard, between Manchester and Florence will be visible to air travelers as they approach the Los Angeles Airport as well as the thousands of anticipated patrons who will eventually visit the Rams and Chargers’ SoFi Stadium, the Clipper’s Arena and the fabulous Forum as they exit the 405 freeway heading southbound to Manchester Boulevard!

The council continued business operations in their meeting that was available to citizens via telephone call-in only and they first conducted a public hearing to consider an ordinance amending the Inglewood Municipal Code to establish policies for Short Term Rentals.*

The council authorized the payment of invoices from Cellebrite for mobile device data extraction and analytics services and from Leverage Information Systems for repair and maintenance of the Police Department’s camera equipment. These funds were sourced from the police department’s Asset Forfeiture Funds.

The council approved the Fourth Amendment to CEQA Funding Agreement No. 18-055 with Murphy’s Bowl to include an additional $96,133.59 to cover costs of certain Legal activities and services (Phase II) provided by third party consultant at the request and on behalf of the City with regard to the proposed development of a National Basketball Association Arena and associated facilities (Project) near the intersection of Prairie Avenue and Century Boulevard; necessary to provide certain environmental and legal services on behalf of the City as required and/or contemplated by the Exclusive Negotiating Agreement.

The council approved the development and staffing of a Housing Protection Department with funding from the General Fund. To accommodate this new department, the council adopted a resolution amending the budget transferring funds in the amount of $1,180,717 to fund the transfer and hire of seven positions and supporting M&O costs.

The council confirmed the appointment of two Inglewood Housing Authority (IHA) Section 8 tenant participants to the Housing Advisory Commission.  Georgia Gist-Williams and Ramsey Jones were appointed by the mayor and confirmed by the council to serve as commissioners. Each will receive $50 per day for attendance in no more than four meetings per month.

The council approved an amendment to Agreement No. 18-150 with Sialic Contractors, Corporation dba Shawnan to increase the contract amount by an additional $332,300 for construction work performed on the Imperial Highway Improvement Project (P610).