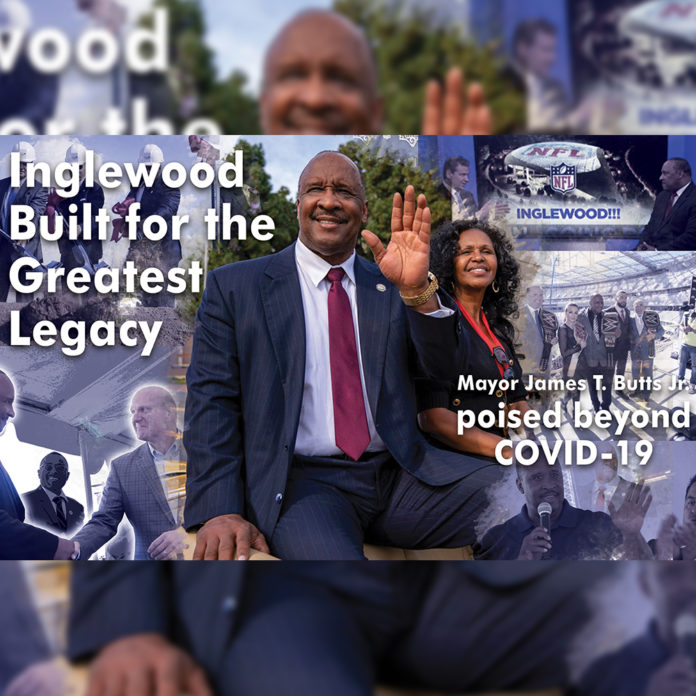 The ease of COVID-19 restrictions had barely been implemented, but the massive green sign was becoming much more clear now.

That sign stretching north and south along La Cienega Blvd. is an invitation to America and the world who will soon witness first hand the future model of how to build, grow, develop and sustain a urban city.

Almost a decade ago the City of Inglewood was left for dead. According to the FBI interactive chart for violent crime rates and statistics, since James T. Butts Jr. was elected mayor in 2011, Inglewood crime rate has consistently dropped, and just a couple of years ago the city recorded a nearly 13 percent decline in 2017 at 12.93 percent.

Rest assured there was not any discussion about professional sports, a city renaissance or as some have alleged without facts gentrification.

Inglewood was a mere after thought, and in many instances not a good thought either.

The most prominent landmark for the City of Inglewood was essentially the Inglewood Cemetery and Mortuary. The iconic Forum only hosted memories of the great days of past.

Butts was not your typical politician, in fact running for mayor in Inglewood was the farthest thing from his mind some nine years ago.

At his core he is a very astute businessman and policeman. He spent 34 of his 45 years of public safety and municipal government experience as the Police Chief in Inglewood and Santa Monica.

It’s rather ironic that Butts became the mayor of Inglewood and not Santa Monica, but their loss was certainly Inglewood’s gain.

The coronavirus pandemic has exposed the fiscal mismanagement that had long been ignored by Santa Monica government officials forcing the coastal town to now be looking down the barrel of a $226-million shortfall by June of 2021.

Santa Monica was considered one of the bright spots from the pandemic that is crippling cities large and small throughout the nation.

In the meanwhile Inglewood has roughly $54 million in reserves and doesn’t anticipate furloughing or laying of any of its employees.

In fact the City of Inglewood employees are among the most dedicated, skilled and deservingly compensated public servants in America.

During a breakfast event honoring Butts in 2019, Kerman Maddox the managing partner of Dakota Communications stated that if any mayor should be running for president it should be Mayor James T. Butts Jr.

Maddox was referring to the bonafide achievements that Butts has earned in the transformation of Inglewood.

One of the first major deals he sealed was in 2011 negotiating with Madison Square Garden to renovate the Forum, years later the Forum leaped to become the top concert venue in California by 2016.

In 2015 & 2016 he was named one of the 500 most influential leaders in LA County by the Los Angeles Business Journal, but clearly was only getting started.

His big coup was sealing the deal for the return of the NFL to Southern California.

You can barely count on one hand the number of failed stadium proposals designed to lure the NFL back to Southern California that were buried by the time Butts had pulled off the unthinkable.

Not only did get bring the Rams back home to the Southland, but the Chargers will also play home games in Inglewood this fall.

He began negotiations with the Clippers in 2017 and after a long and contentious battle the deal for the Clippers to build a stadium in Inglewood is moving forward and the team is expected the begin play in Inglewood by 2024.

Butts may have been at his absolute best during the coronavirus pandemic (COVID-19) where he demonstrated a steeled calm demeanor, following the data from scientist and health experts and deliberately declaring a state of emergency for the city when it was absolutely necessary.

His polished leadership brings to mind another African American mayor who hailed from a police department.

The late Los Angeles Mayor Tom Bradley is still a standard by which all mayors, black and white are measured.

Bradley’s legacy is engraved everywhere, from LAX, to schools and artifacts.

Butts is on his way to leaving a legacy that cannot be duplicated by any mayor. That mark can be traced to Inglewood, that South Bay City that has been brought from the abyss to a shinning city on a hill.