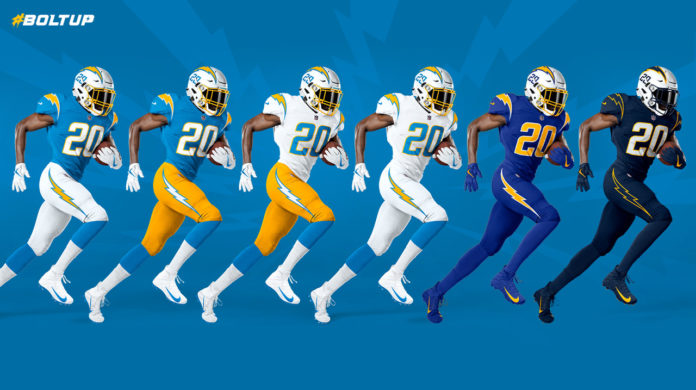 The Chargers unveiled their much-anticipated new uniforms for the upcoming 2020 season, the team’s first in its new SoFi Stadium home.

In a video debuting on NFL Network’s Good Morning Football and subsequently released on the team’s digital media channels, viewers thought they were going to hear the usual clichés surrounding what inspired the Bolts new uniforms.

After a brief, stylized montage including some of the Chargers most iconic looks, a voiceover asks, “How do you improve on perfection?”

The answer: “First, you start with the design process.”

The v/o then launches into a cassette tape on fast forward explanation, “Taking inspiration from the subtle curvature of the bolt, we analyzed the ratios underpinning the logo in an effort to craft…,” before the audio and film suddenly break down and bring the video to a temporary hault.

“Nah, who cares,” the piece continues. “All you need to know is we took the best and made it better.”

And for those who were able to find the words, here’s what they’re saying about the new uniforms (in alphabetical order):

“I love the numbers on the side of the helmet.”

“We definitely have the sickest uniforms by far.”

“The all navy has always been my favorite and those are even cooler.”

“I like the simple bolt, too, how it just has the yellow and the blue in it.”

“Those are so classic, crisp, clean! Those are fantastic.”

“Those are classy, I love the yellow pants, those are awesome.”

“We’re always going to have the sweetest uniforms no matter what.”

“This right here is my favorite cause you got the old uniform mixed in with the new.”

“The thing that stands out to me the most is the new Chargers emblem.”

“We have the most unique jerseys. Definitely swag with it. A+ for sure!”

“Whoever came up with it, you get two thumbs up from me.”

“I didn’t expect this, but ya’ll did ya’ll thing.”

“That’s the best uniform in the NFL. Hands down. Not even close.”

“I can’t speak for everybody else but I’mma be swaggin this uniform out this year. I’m definitely going to be the number one best dresser, top swag.”

“I like what they did with this new bolt, man. That’s clever.”

“That white on white on the road is coming in and doing some damage.”

I was curious about the hype surrounding the new Chargers uniforms…I didn’t get it. Then I got a sneak peek. Now I get it. They are tremendous.”

“I assure you, it is the number one uniform that there is going to be in football. Sick. Sleak. Looks incredible…the Chargers uniforms are the sweetest of all.”

“That all-white is sweet, man. Can’t go wrong with the all-white.”

“Ya’ll changed the bolt in the helmet to match the uniform!”

“Without a doubt, the best uniform ever.” (re: navy on navy)

“That’s the best navy I ever seen.”

“The white are clean but then you don’t wanna make a tackle til the third quarter cause you’re too clean.”

“New stadium, new look. I rock with it.”

The Clippers’ Inglewood Arena will be Beautiful, Comfortable and about...