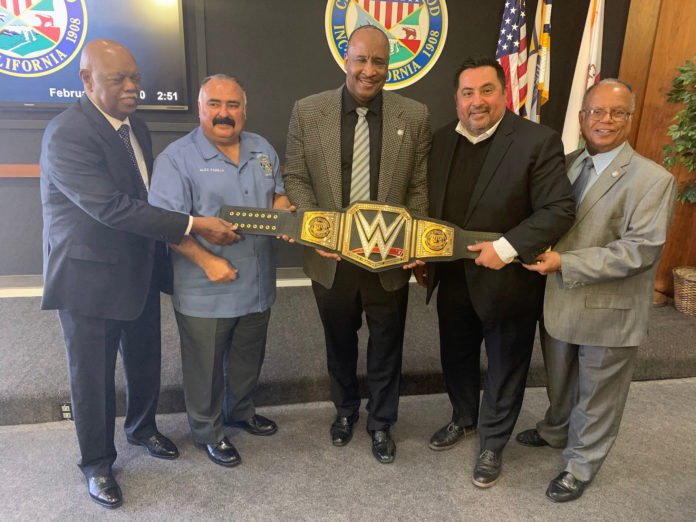 The weekly city council meeting got underway on time and the council members swiftly discharged the city’s business.

The council approved Amendment One to Agreement No. 19-302 with Meyers Nave Riback Silver & Wilson, PC for expanded legal services and additional compensation.

The council approved a Memorandum of Understanding with the Los Angeles Food Bank, to support participation in the Older Adult Expansion Program.

The council set a public hearing to consider an appeal of Planning Commission Denial of Special Use Permit No. 2019-014 (SP-2019-014) to allow the sale of beer and wine for off-site consumption from an existing convenience market at 400 West Manchester Boulevard.

The city treasurer began her report with a rambling diatribe, expressing her opinion about how the Los Angeles Rams ultimately selected the City of Inglewood to build their multi-billion dollar stadium and how a city staffer travelled to the Super Bowl and charged that trip to the City of Inglewood. With what appeared to be a jab at the mayor and city council, the city treasurer said that a cartoon character could have delivered the stadium to the city and she demanded that the city be repaid for the unauthorized Super Bowl trip. When her time expired, the mayor asked that her microphone be silenced so that the council meeting could continue.

At that point the city treasurer proceeded to violate several elements of the City of Inglewood, Rules of Decorum, for city council meetings.

Rule number one reads, ‘persons addressing the City council must do so in an orderly manner without making personal, impertinent, slanderous or profane remarks to the Council, City staff or general public. Violators may be barred from speaking further and could be ejected from the meeting.” Rule number two reads, “persons addressing the City council shall limit their remarks to three minutes or the time established by the presiding officer for that subject. The presiding officer may set different time limits based upon the number of speakers wishing to address the Council.”

At the end of the meeting the mayor expressed his concern for the city treasurer and explained the complicated, difficult and uncertain process of bringing the Rams to Inglewood and complemented the council for their skill in delivering the stadium. He also asked the city staffer who was accused by the city treasurer of unauthorized travel to Miami for the Super Bowl to explain himself. The staffer indicated that he did not travel to Miami and watched the game on television with his family in Inglewood.

A representative from Assemble member Autumn Burke’s office invited the community to enjoy a cup of coffee with the member to share their thoughts regarding state and legislative issues that affect the community. The event will be held on Saturday, February 29th from 8:00 – 9:30 am at the 7-Eleven at 913 S. Prairie Avenue, Inglewood 90301.

A representative from the Los Angeles County Assessor’s office reminded homeowners to take advantage of the annual property tax deduction.

Several of Loretta Andrews’ family members appealed to the city council members to ensure a thorough investigation into her tragic hit and run accident. A Celebration of Life service is scheduled for February 22, 2020. Information is available at 323/503-6939.

During the public comments Council Member Dotson thanked the community and the city staff for organizing a successful document shredding event. The remaining council members expressed their concern for the City Treasurer, reiterated the work that was necessary to bring the Rams to Inglewood and shared their condolences to the family of Loretta Andrews.

The Mayor displayed the Wrestlemania Championship Belt that was given to the city when they agreed to bring their world-famous wrestling event to the City of Inglewood. He closed the meeting in honor of Loretta Andrews.