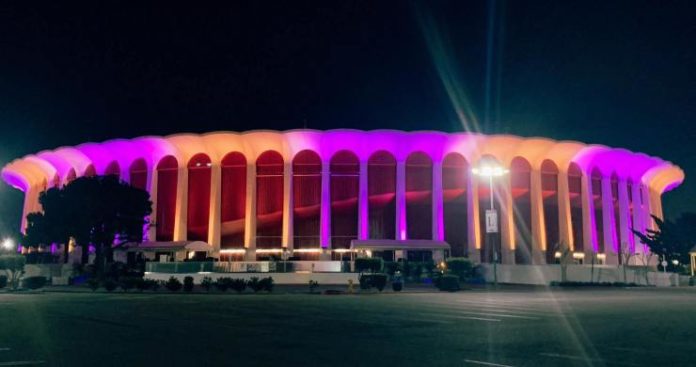 The long running legal feud between the Los Angeles Clippers and their owner Steve Ballmer and Forum owner Madison Square Garden Co. (MSG) reached a resolution this week when sale of the concert venue was agreed upon for $400 million in cash.
In announcing the deal Ballmer made a short statement, but in it doubled down on his commitment to the City of Inglewood.
“This is an unprecedented time, but we believe in our collective future,” Ballmer said in a statement. “We are committed to our investment in the City of Inglewood, which will be good for the community, the Clippers, and our fans.”
During a previous interview, Inglewood Mayor James T. Butts Jr. praised Ballmer.
“I stand solidly behind Steve Ballmer of the Clippers who have stood shoulder to shoulder with the City to make this a reality.”
The Mayor reiterated the significance of the Clippers new arena construction project to the residents of Inglewood.
“My intent is to have maximum opportunities for residents of Inglewood with all development projects if this (purchase) is consummated,” Butts told Inglewood Today.
The deal will become official before the fall, but The Forum will continue to operate as a live music venue for the foreseeable future. All of the current Forum employees will be extended job offers, according to the report, which was first published by The Los Angeles Times.
According to the published report, consummation of the deal will resolve litigation brought by MSG, whose executive chairman is New York Knicks owner James Dolan, to block the Clippers’ proposed privately funded, billion-dollar arena at 102nd and Prairie Ave. and Century Blvd.
The Clippers now have a clear path to continue their plans to build a state of the art complex that will be named the Inglewood Basketball and Entertainment Complex.
MSG brought three lawsuits against the Clippers in their effort trying to block the project, a divisive campaign that split fractions of the Inglewood community.
With the Clippers deal moving forward, The City of Inglewood is on the cusp of clearly being established as the sports and entertainment capital of America, if not the world.
The city can now boast of two NFL teams, the Chargers and Rams, and an NBA team in the Clippers.
Having The Forum and the new Clippers arena under the same ownership will allow for coordinated programming between the two venues, improving traffic congestion around basketball games and concerts.
“We know traffic is something that many Inglewood residents worry about. While we have gone to great lengths to provide an unprecedented traffic-management plan for the new basketball arena, this acquisition provides a much greater ability to coordinate and avoid scheduling events at the same time at both venues,” said Chris Meany, a principal of Wilson Meany, the developer overseeing the new basketball arena project.
The L.A. Clippers’ new arena will create an estimated 7,500 high-paying construction jobs and 1,500 permanent jobs once the complex is open. In addition to the economic and civic benefits, the Clippers have proposed a $100 million package of community benefits.
There isn’t another city in the nation that can counter that.

How the Chargers Can Clinch a Playoff Berth

The Clippers’ Inglewood Arena will be Beautiful, Comfortable and about...