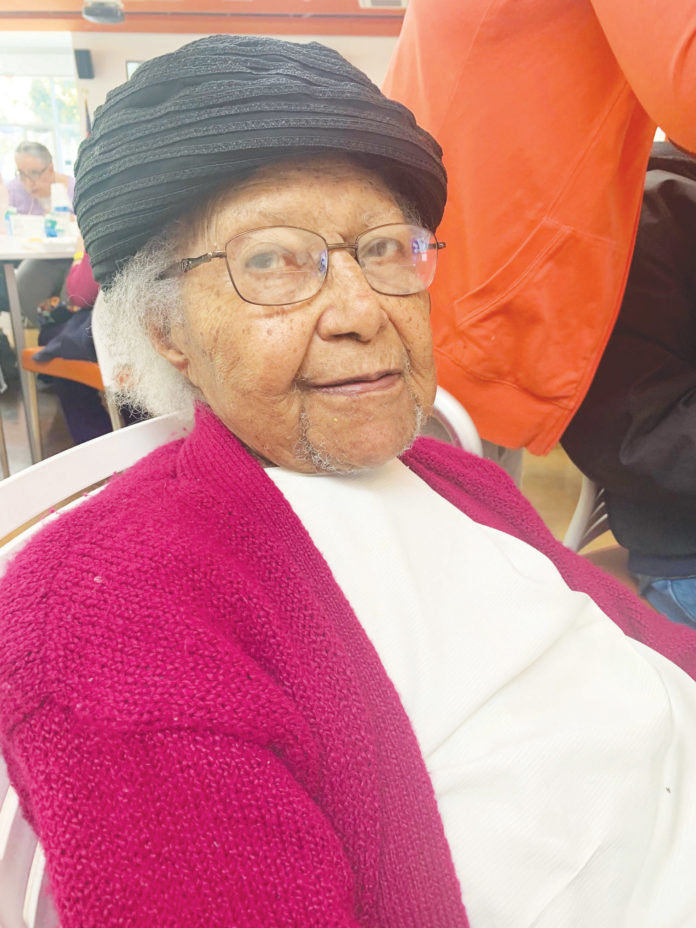 Vernita Smith, who was born in 1922 in Oklahoma City, Oklahoma, prides herself as being the oldest (most senior) citizen who regularly attends the Inglewood Senior Center and this week, on Wednesday, enjoyed the lunch feast of herbed baked chicken, split pea soup, wg couscous, cauliflower, cucumber onion and dill salad, pineapple tidbits and milk.

Smith was the youngest child with four older brothers and one sister. The family moved from Oklahoma to Watts in Southern California when she was about nine years old. Her mother was a teacher and her father was a Pullman porter. With both working-parents in the household, and as the ‘baby’ in the family, smith enjoyed a comfortable upbringing.

Smith attended Compton College and later graduated from the University of California Los Angeles with a nursing degree. She earned the designation of Registered Nurse, RN, and was the first African American to be hired as a nurse at the Los Angeles County Hospital. During her long nursing career in Southern California, she had worked at several of the area’s medical facilities including tenure at Martin Luther King Hospital where she was a critical care nurse and worked in the emergency room that gained wide acclaim for their treatment of traumatic and often gang-related shootings and other assaults. She remembers working with Dr. George E. Locke, the retired Chair of the Department of Neurosciences and the brain surgeon whose medical feats achieved widespread acclaim.

Smith had a swift answer when asked about her secret for a long and healthy life. “Try to be a Christian,” she said and that was also the answer when she was asked what advice she had for young nurses who are embarking on a nursing career. When you put Christ first, everything falls into place.

Smith did not describe any special diet that has contributed to her longevity. She has never smoked cigarettes or adopted a vegan lifestyle and reluctantly admitted that she enjoys an occasional glass of wine but never any hard liquor. When she was younger she exercised regularly and maintained a healthy weight. Moderation is the key element, she said.

Smith’s favorite thing to do is travel. She has been nearly everywhere in the world except Africa. “The only reason I have not been to Africa is that I could never find anyone to travel with me,” she explained. “I still want to visit the African continent and at the age of 98 she said she is ready to go, if she can find a travel companion!

Smith is not on Facebook or Instagram so if you are interested joining her on a trip to Africa, you will probably find her dining with friends at the Inglewood Senior Center.