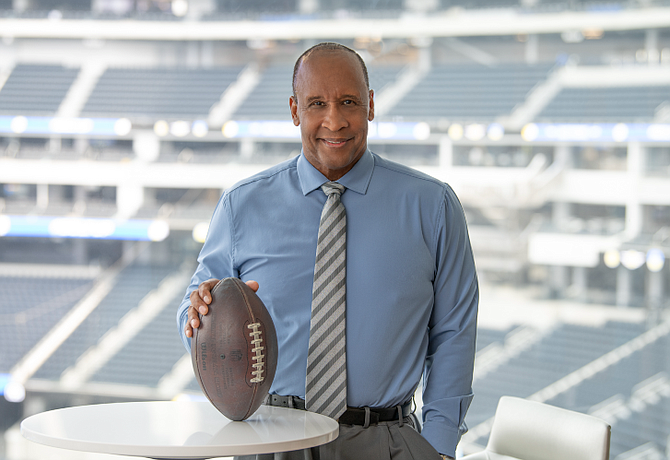 In the 1980s, Inglewood was known as the City of Champions. It was home to the “Fabulous Forum” where the “Showtime” Los Angeles Lakers were routinely hanging their championship banners and where hockey great Wayne Gretzky brought glitz to the Los Angeles Kings just a few years later. The neighboring Hollywood Park racetrack frequently hosted film stars and other celebrities.

But by the time James Butts became Inglewood’s 12th mayor in early 2011, the formerly world-famous Hollywood Park sports district had shriveled to a Sizzler restaurant.

Now, 11 years into Butts’ tenure as mayor, Inglewood is once again catapulting onto the international sports stage. The newly built SoFi Stadium, home to the Los Angeles Rams and Los Angeles Chargers, will host the National Football League’s Super Bowl LVI in February, the NCAA’s National Championship Game in 2023, likely some key events for the FIFA 2026 World Cup and, of course, parts of the 2028 Summer Olympic and Paralympic Games.

What’s more, the Intuit Dome is taking shape across the street; when completed in 2024, it will be home to the Los Angeles Clippers. And then there’s the Forum itself, which Clippers’ owner Steve Ballmer purchased last year from Madison Square Garden Co.; it’s once again bringing headline entertainment talent to Inglewood.

These efforts and events all represent a stunning and swift transformation for Inglewood that few could have imagined back in 2011 — a transformation that Butts played a key role in speeding along.

“Mayor Butts was completely instrumental in the accomplishment of all these things in Inglewood,” said Fernando Guerra, professor of political science and director of the Thomas and Dorothy Leavey Center for the Study of Los Angeles at Loyola Marymount University in neighboring Westchester. “While some of these things may have happened, they happened more rapidly and more completely than if he had not been present.”

The transformation began within weeks of Butts being sworn in as mayor. Madison Square Garden approached the new mayor with a plan to purchase the Forum, renovate it and turn it once again into a premier entertainment venue. Within a year, Butts had pushed the plan through the city process; the City Council approved the deal in May 2012. The $100 million Forum renovation was completed two years later in 2014, and the venue was relaunched that summer.

“That Forum deal was the catalyst for everything that followed,” Butts said in an interview with the Business Journal. “Immediately after the deal was announced, we started getting interest in building a new football stadium.”

Initial negotiations for a stadium to be built by Mark Davis, the son of late Raiders owner Al Davis, fell through. Butts said that’s when he, other top city officials and executives with San Francisco-based Stockbridge Capital Group, then the sole owners of the 300-acre Hollywood Park parcel, approached Stan Kroenke about building a football stadium. Stockbridge Capital and Kroenke’s Hollywood Park Land Co. ultimately teamed up to build the 70,000-seat stadium. The price tag started at around $2 billion but ultimately soared to about $5 billion. The deal also paved the way for Kroenke’s company to start building out a retail, office and residential development on the remaining acreage of the 300-acre parcel. The first phase of that project is well underway, with portions slated to open later in 2022.

Meanwhile, the Clippers were looking to get out of the multiple sports team tenancy situation at what was then known as Staples Center in downtown. Inglewood had more vacant land next to the Hollywood Park parcel and emerged as a leading option for the team, in part because of the momentum already building around the football stadium and planned Hollywood Park development.

“In 2016, we met with Steve Ballmer, and that resulted in the groundbreaking earlier this fall for the Intuit Dome,” Butts said.

Guerra said one of the more remarkable aspects of all these development projects is how they went through the approval process largely unscathed.

“This is a rare instance where the scopes of these projects survived intact through the entitlement and approval process,” Guerra said. “And Mayor Butts was responsible in large part for that. While there were many disparate personalities, land parcels and processes in play, he’s the one person who was the glue that has held it all together.”

Guerra said a key factor behind this success was Butts’ ability to marshal votes from the Inglewood City Council without having to take on so many allies who each would have exacted compromises in the projects.

Butts said in the interview, “Teams will not migrate to cities with dysfunctional governments. I understand how department heads think and how to break down bureaucratic silos. I would tell team owners (and other project developers), ‘If you can bring sports and entertainment to Inglewood, then go ahead and do it.’”

The next big item on Butts’ to-do list is to get ready for construction of a transit line connecting the downtown Inglewood area with the emerging sports and entertainment district a couple miles to the east and ultimately connecting to the Metro Crenshaw-LAX light rail line expected to open in 2022. The cost of this 1.6-mile elevated rail transit line is estimated at about $1 billion.

Butts said in the interview that the city has secured $342 million in grants for the line, completed the project environmental impact report and has had much of the architecture work completed. Although he called the project “shovel ready,” there’s no stated start date. Inglewood officials have said they aim to have the rail line completed by 2027.