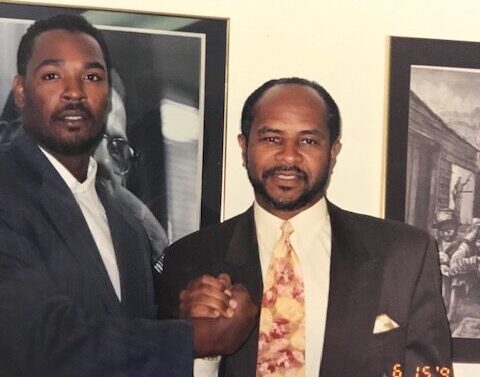 Milton Grimes, the man who served as the lead attorney for Rodney King 30 years ago has been paying close attention to the events that led to the death of George Floyd.

Grimes was responsible for winning a $3.8 million civil claim on behalf of King, the Black motorist who became the most infamous victim of police brutality in the history of America.

There was nothing new about what happened to King on March 3, 1991. Blacks in Southern California and throughout America had consistently suffered brutality and racism at the hands of police officers with regularity.

What changed everything in 1991 when those four LAPD officers were having their way with an unarmed defenseless Black man was a white amateur filmmaker George Holliday who recorded the event on his then cutting-edge Sony Handycam 8-millimeter video camera.

“I had been receiving complaints from Black clients all the time, but I never could verify or document any of it, but Rodney King changed all of that,” Grimes explained to Inglewood Today in an exclusive interview.

March 3, 1991 may not have ever been known if not for Holliday, it became the world’s first viral video, and he became an early example of citizen journalism documenting police brutality in the most graphic and disturbing terms.

That was a time before police body cams, cell phones and social media crossed the thin blue line that has sacredly protected police from their worst behavior for decades. Holliday exposed it to the world.

King’s beating sparked the 1992 civil unrest, an event which Grimes said he understood how young Black people felt at the time.

Those four LAPD officers who beat Rodney King within inches of his life escaped punishment three years later with 12 Simi Valley jurors acquitted them in 1994.

“That was a mule kick. I felt like I got hit by a Mack Truck,” explained Grimes of the verdict. He blamed the Los Angeles District Attorney which allowed for the case to be moved to Simi Valley.

The death of George Floyd on May 25, 2020 brought Grimes full circle.

A month after the nation and world witnessed the cold blooded murder of Floyd by then Minneapolis Derek Chauvin, Grimes was accompanied by his 14-year old daughter for a protest march in of all places Simi Valley.

Mike Judge, a Simi Valley City Council member and 30-year police veteran posted on Facebook in advance of the march “Wanna stop the riots? Mobilize the septic tank trucks, put a pressure cannon on em… hose em down…. the end.” He apologized later, but for Grimes’s apprehension about Simi Valley was being verified. After all this was the same place that made him feel like he had been kicked by a mule.

Although it was 29 years later, things could not have changed, right?

“This was important because I wanted to see where the Simi Valley jury was from. I saw four or five white men declaring support for the police. Marchers were relegated to the side walk and then all of a sudden, I recognized that white people were waving in support of us. Then an older white man declared this police brutality has to stop,” added Grimes.

Grimes and his daughter both became emotional during a march that consisted of one percent Black people. They would attend another two weeks later in North Hollywood.

After jurors in a Minneapolis court room convicted former police Derek Chauvin of the murder of George Floyd on April 20 it galvanized a nation of advocates against police brutality and it also brought back candid memories of Los Angeles motorist Rodney King.

The two events are eerily similar in many respects.

Both Floyd and King were large Black men who measured 6’4 and 6’3, respectively. The two of them also had a history of drug addiction. They both became the symbol of police brutality and racial injustice.

Collectively albeit separately, they are individuals whose fate at the hands of police inspired all of us to go beyond burning down the neighborhood and transforming our activism into legislative change.

We are still quite far from getting there, but the beating of Rodney King and the killing of George Floyd is pressuring the scales of justice that has always been tilted towards injustice.

“I’ve been following what’s been happening all across the nation. The Chauvin verdict is just a drop in the bucket, but because of George Floyd we are at a better place. Simi Valley gave me a sense of hope that perhaps we can end racism,” Grimes concluded.