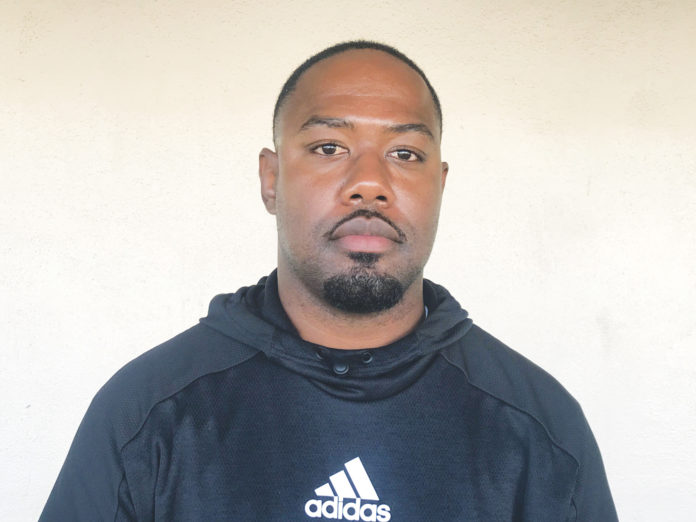 Inglewood football is about redemption for coach and team

Three years ago Mil’Von James was a coaching star in the high school when he led Los Angeles Hawkins High School to the brink of a Los Angeles City Football Championship in 2016.

Life could not have been better for both James and Hawkins, an obscure high school in the shadows of city powers Narbonne, Crenshaw and San Pedro.

After all when James arrived at Hawkins in 2013 he was the head coach of junior varsity, but after just two games as JV coach with a team of gifted players he was promoted to the varsity head coaching position.

“I was only supposed to be the JV coach. Hawkins was a school that opened its doors in 2012 and the football program started in 2013. I coached JV for two games and

(He had two star players in eventual D1 recruits Corner Greg Johnson, quarterback Dylan Lemle) the JV team was a lot better than our varsity,” James explained to Inglewood Today.

That’s when James, a former star at Fremont who earned a scholarship to UCLA before finishing his collegiate career at UNLV, set Hawkins out on a football glory run that would produce Division I players that would eventually play for USC among others.

The success at Hawkins turned to horror when following the 2016 season the City Section cited the program for the use of ineligible players, forcing the principal, vice principal and football coaches to be fired.  The school was placed on probation and Hawkins had to vacate a season of success.

“We enjoyed great success, but unfortunately it did not turn out the way that I would like, but all things have to come to an end,” said James.

James left Hawkins in 2017, and as he says just traveled around the country observing football games.

When asked why it ended, James responded: “Everyone has an opinion on that. I know the truth and the truth is a lot of people were not prepared to deal with what we were doing. It was easier to paint a narrative that was far from the truth than to actually give credit to a group of young Black men who was working harder than they did.”

James was 26-27 years old at the time and admittedly made some mistakes along the way, but none too egregious that could not have been corrected.

Hawkins still has not recovered, but the man responsible for building a football powerhouse from scratch is on the rebound.

Inglewood High School hired James to take over their failing football program in the early spring of 2019, a challenge potentially greater than what he endured at Hawkins.

The Sentinels were coming off a winless 0-10 campaign, following three losing seasons under three head coaches.

This week, the Sentinels enter their 7th game of the season at home against 1-5 West Torrance with a sparkling with an unblemished 6-0 record under James in his first season at the helm.

“As soon as I arrived here on campus we hit the weight room. We didn’t do anything else, but lift weights. We had to establish a core foundation of what we wanted to be,” said James.

James said he wanted the players to get bigger, faster and stronger.

“We put those kids in the weight room and they lived in there. Academics and weight room. We didn’t touch a football until late June.”

He says the success the Sentinels are enjoying is from the coaching staff challenging them mentally and physically.

He wants the players to understand why  and how various schemes and coverage’s work.

The Sentinels spend more time in the classroom watching film than they do on the practice field where this week they only wore the pads for about an hour and a half.

Inglewood only has about 30 players on a great day, so James says it’s about being smarter.

He credits senior wide receiver Montana Lemonious-Craig as being one of the foundations from which he had to build.

“He’s been here all four years. He lives right across the street. He has been an Inglewood kid from Pop Warner and he bleeds the City of Inglewood,” James elaborated.

James says Craig was the first kid that he met when he took the job.

“I made it a point to meet him because I had heard some good things about him. He was the player of the year in basketball and I wondered why is this kid sticking around on an 0-10 football team,” James questioned.

After the two talked, Craig demonstrated to James how passionate he was for the school and the football team and the love that he had for the community.

“That meant everything to me. So, I ran everything through him and told him this was his team and the turnaround will be on his back.”

It was kids such as Jaquan Banks, Chris Gonzalez and Devin Hancox, players that most people would not give much credit to that are essentially responsible for Inglewood enjoying a special season.

The 34-year old James encouraged the players to defeat a 0-10 mentality.

So far, the Sentinels and James are on their way to the playoffs and then a chance to play for something really special, but if nothing happens from this point on they have already redeemed themselves.