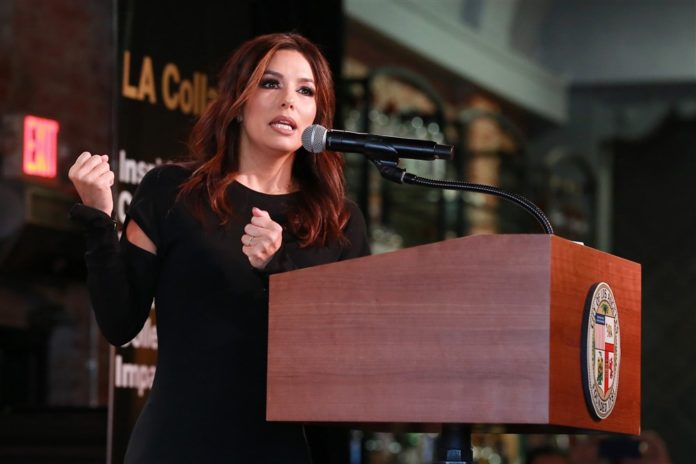 Actor and philanthropist Eva Longoria Bastón is leading an array of influential Latinos to marshal their clout and the voices of the nation’s second largest population group in a quest to erase inequities that have made the impact of COVID-19 more devastating on Hispanics.

Longoria Bastón said Monday the nation is now listening and engaging in social justice so “now is the time to capitalize on that momentum” through the launch of Momento Latino, a coalition of groups focused on health, education, economy and politics to rally for the nation’s estimated 60 million Latinos, parts of which have long been overlooked and underserved.

The inequities that permeate the Latino population were not caused by COVID-19, Longoria Bastón said. “It took a pandemic to tell us that farmworkers were essential,” she said.

“This is not about setting up a single fundraiser and walking away. It’s a movement and we want it to become a movement for the Latinx community,” she said.

Her cofounder Henry Muñoz, a philanthropist and Democratic fundraiser and the cofounder of SOMOS Health care, a New York-based health care provider network for Medicaid enrollees, said the group hopes it can put itself out of work.

“We wish we could tell you that the impact of COVID-19 on our community was lessening but that is not the case,” Muñoz said. “It’s not going away any time soon.”

A recent Centers for Disease Control and Prevention study found that as of June 13, COVID-19 hospitalization rates among Latinos are four times the number of hospitalizations compared to whites. About a fourth of Latinos said in May they know someone who has COVID-19 and a third reported knowing someone who died from the coronavirus, according to a poll released last month.

That data was collected before the most recent surges in coronavirus cases and hospitalizations in the states of Texas, Arizona, Florida and California— states with large Latino populations.

On its website, Momento Latino declares that “America can’t recover from COVID-19 until the Latino community recovers from COVID-19.”

“COVID-19 has had a disproportionate effect on the Latino community’s health, education and economic stability, including a lack of Spanish-language resources. The pandemic has exposed and exacerbated longstanding inequalities,” Momento Latino website states.

U.S. Rep. Joaquín Castro D-Texas, twin brother of former 2020 presidential candidate Julián Castro and one of the Momento Latino cofounders, announced on Twitter last week he had lost his stepmother to COVID-19.

Julián Castro told MSNBC’s Chris Hayes that his father now has the virus and can’t be around other people as he grieves for his wife.

Latinos have the highest rate of people lacking health insurance; the greatest share of uninsured Latinos are in Texas—where coronavirus has surged.

Rep. Castro urged that the newly formed group rally Latinos to pressure the U.S. Senate to pass the “HEROES Act”, a $3 trillion-dollar coronavirus relief package that includes another round of stimulus payments, aid for local and state governments, the unemployed, renters and business owners, among other things.

It also includes funding for coronavirus testing, which has been less accessible in some minority communities, according to a recent report by Science magazine.

“Passing the HEROES Act and marshaling our voices is going to be critical,” Joaquín Castro said.

The call also included cofounder Chef José Andrés, who has been providing free meals to people during the pandemic, and young actors Jessica Garza and Johnathan Nieves, who play Josefina Vega and her brother Mateo Vega in “Penny Dreadful: City of Los Angeles.”

The “Penny Dreadful” actors encouraged young Latinos to seize the moment and join in.

“It isn’t enough to just, like, see what is going on and to recognize it and see inequalities and to just move on with our day,” Nieves said. He said taking actions through the group “gives us a foundation to invest power into ourselves.