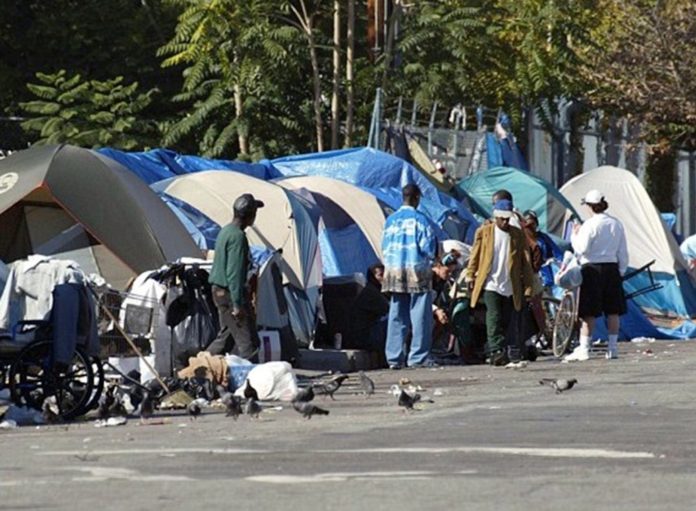 The Democratic mayor whose downtown streets have become home to filthy, drug-infested encampments for thousands of people issued a public invitation for the president to walk the streets with him and see firsthand the suffering and desperation.

The growing homeless crisis in L.A. and across the nation “is not his fault, nor is it my fault, it is something that has been decades in the making,” the mayor said, noting that both Democratic and Republican cities have too many people on the streets.

“I welcome federal involvement in helping us solve homelessness,” the mayor said.

Garcetti’s offer for a bipartisan alliance came a day after the president called the homeless crisis in Los Angeles, San Francisco and other big cities disgraceful and threatened to intercede, although he provided no specifics on steps he was considering.

While Garcetti said he wanted cooperation with Washington, Trump faulted the “liberal establishment” for the problem in an interview with Fox News.

“We may do something to get that whole thing cleaned up. It’s inappropriate,” Trump said.

The mayor avoided a combative tone, telling KNX Radio in Los Angeles that he’s not interested in scoring political points and wants to work with Trump to save lives. It’s a good day when the president talks about homelessness, he said.

But the mayor did take issue with the president on a few points.

Trump said in the interview that the surge in homelessness and encampments started two years ago. However, problems with the homeless population and L.A.’s notorious Skid Row neighborhood extend into the last century.

While not solely attacking Trump, he said cuts in federal housing funds also contribute to the homelessness spiral.

Trump would make an unlikely pairing with the mayor, who comes from a heavily Democratic state recognized as the center of the so-called Trump resistance. Trump lost California to Hillary Clinton in the 2016 election by over 4 million votes.

The president’s remarks in the midst of his re-election campaign echo familiar themes — pointing a finger at Democrats he blames for opposing his agenda on immigration and other national problems.

He depicted Democratic-led San Francisco and Los Angeles as dysfunctional, politically liberal cities, adding, “This is what I’m fighting.”

On Monday, Trump lashed out at state Democrats who want to fund health care for some adults who entered the U.S. illegally. “It’s very unfair to our citizens and we’re going to stop it, but we may need an election to stop it,” the president said in Washington.

Last year, when Garcetti was considering a possible White House run, he said Trump had done “plenty of racist things” to divide the nation while failing to deliver on health care reform and other promises.

Garcetti was elected promising to focus on paving streets and other government basics. But homelessness has come to overshadow his early agenda, and he’s facing a possible recall election over public unrest over the spreading problem.

Democratic Gov. Gavin Newsom told reporters in Emeryville that Trump neglected to mention the thriving economies in Los Angeles and San Francisco, but added that homelessness is a major problem that is growing worse.