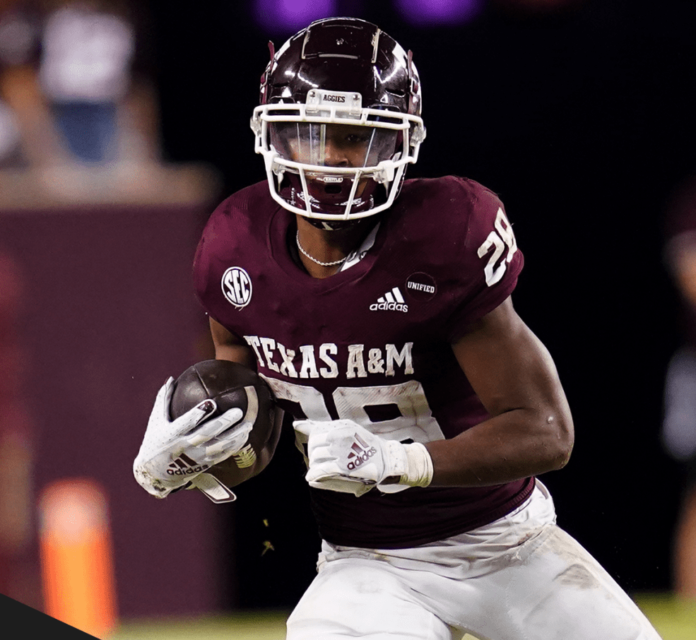 The 2022 NFL Draft has come to an end and the Chargers have added eight new players to their team over the past three days. On Saturday, the Bolts selected six players from a variety of positions. After the draft concluded, general manager Tom Telesco and head coach Brandon Staley took to the podium to discuss how the draft went and the additions they made to their roster.

To kick things off Saturday, the Bolts drafted Texas A&M running back Isaiah Spiller with the team’s fourth round pick. Staley talked about the addition of Spiller, who led the Aggies with over 1,000 rushing yards in 2021, and what he’ll bring to the Chargers backfield.

“[We] just felt like he was a really productive player coming from an elite program,” Staley said. “You’re really seeing him have to navigate some NFL-type runs against NFL-type fronts, being in the SEC West. We’re really excited to add him to the group. I think that it’s going to create great competition in that room. I was really excited to be able to pick him.”

The six-foot, 217 pound running back was also a named to the second team All-SEC last season. Telesco talked about his characteristics and the competition Spiller will bring to the room.

“Big back, well-rounded,” Telesco said. “A lot of production in the SEC. A lot of big, explosive runs. 20 years old, so he has a lot of good football ahead of him. Wanted to add another running back to that room to kind of compete for some work with [RB] Austin [Ekeler]. It was a good pick for us.”

With the team’s final pick in the draft, the Bolts added Purdue running back/fullback, Zander Horvath, who led Purdue in all purpose yards in 2020. Staley talked about where he sees Horvath fitting in on the Bolts roster.

“He’s a guy that has a lot of versatility; running the football, catching the football, blocking, special teams,” Staley said. “He has a pro body and we’re just going to figure it out. I think starting him out at fullback and giving us a real look in a two-back role, but then, as a core special teams guy, just in that mold. This guy did a lot for Purdue.”

Added a lineman to both sides of the ball

The Bolts used their next two picks in the fifth and sixth rounds to take a lineman on each side of the ball. The Chargers selected UCLA defensive lineman Otito Ogbonnia in the fifth round to add depth to the Chargers defensive line group. Ogbonnia, who gets to stay in Los Angeles, recorded a career-high 30 tackles in 2021 after starting every game for the Bruins last season.

“Big, strong defensive tackle,” Telesco said on what Ogbonnia brings to the Bolts. “He was a two-sport college athlete for at least two or three years at UCLA. He was a shot-putter there, which is always interesting for that event because the lower-body explosion, upper-body explosion, and he plays defensive tackle. Really excellent size — strong, leverage. Great kid. Had a chance to spend a lot of time with him here at the local day, so that’s always helpful.”

With their sixth-round pick, the Bolts chose another lineman, but this time on the offensive side. The Bolts took Georgia offensive lineman Jamaree Salyer who was a key contributor for the 2022 National Championship team. Salyer lined up at tackle and guard for the Bulldogs throughout his career and was able to slow down new Detroit Lions pass rusher Aidan Hutchinson when Georgia played Michigan in the College Football Playoff Semifinal.

“Super excited about this guy,” Staley said. “We held this guy in really high regard. He was at the University of Georgia, a National Champion. Beyond that, where he played for them, he started for two years at tackle and inside. You were able to see him against the best in the country…You were able to see him operate. Just in that league alone, I think that it was a really pure evaluation. He has size. He has real toughness. Heavy hands. He’s really smart.”

With a sixth and seventh round pick, the Chargers added two new pieces to their secondary to go along with new safety JT Woods, who they added on Friday. The Bolts selected Wake Forest defensive back Ja’Sir Taylor who played in 62 games throughout his college career. Staley talked about how the scouting they did on Taylor helped them get to know their new defensive back.

“Just felt like we knew a lot about [Taylor].” Staley said. “He’s a two-time captain [at Wake Forest]. He also was a kickoff returner. He had a kickoff returned for a touchdown this year versus Old Dominion. I just think that you’re getting a DB with good dimensions. He’s five-foot-11, 190 [pounds]. 4.4 [40-yard dash]. 37-inch vertical [jump]. Ball skills. He’s played inside and outside for Wake [Forest]. Just feel like he’s a DB, a guy that we’d like to join up with.

With their first seventh round pick, the Bolts selected Deane Leonard, a Alberta, Calgary native who played two seasons at Ole Miss before declaring for the draft. Telesco talked about where he sees Leonard fitting in on the Bolts roster.

“Probably play inside and outside,” Telesco said. “He played Canadian college football for three years, then two years at Mississippi. Ran fast, is quick. He has some cover ability. There will be some good competition in that backfield.”

The Chargers also agreed to terms with 14 undrafted free agents following the conclusion of the draft.