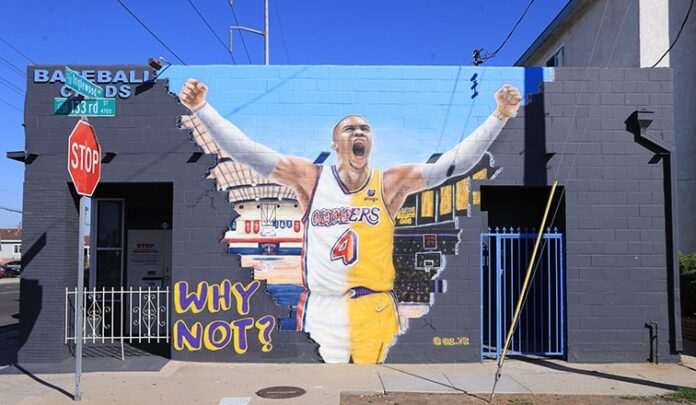 An LA mural, by Gustavo Zermeño Jr. Commissioned by the Lakers x bibigo

There is a sit-down interview that Kobe Bryant had done with the New York Times where he talked about this concept he called “the infinite groove.” The article’s writer, Philip Galanes, asked Kobe if “being great in the clutch means knowing there’s a moment after the clutch?” To which Kobe replied, “there’s an infinite groove. Whether you make the shot or miss it is inconsequential.

The mindset conveys that the result isn’t promised, no matter what. There’s no insurance that you will make the shot or achieve your dreams. There’s also no promise that you won’t — and that’s why you should do it. Because all that is promised is the infinite groove.

The infinite groove looks a little something like this:

At the intersection of South Inglewood Ave and West 133rd Street in Hawthorne, California, about a mile and a half from Leuzinger High School, stands A Baseball Clubhouse and Comic Books shop. Los Angeles Muralist, Gustavo Zermeño Jr. approached the shop owners Philip and Phyllis Knoll and asked if he could paint a mural of Hawthorne Native, Leuzinger alum, and Lakers point guard Russell Westbrook.

The mural details the dichotomy of Russel Westbrook’s past flowing into his future. The Leuzinger Olympians Gymnasium sets the scene on the left and STAPLES Center on the right. The colors white, blue, and red bleed into purple and gold.

“I’m gonna’ make sure I just do my part in going out and playing for him and through him as I compete in this uniform,” Westbrook said of his return to LA, his new team, and his admiration for Kobe.

Gustavo has been galvanizing his city with pieces like this for seven years.

It was his high school art teacher that introduced him to the different styles of painting. “I fell in love with going bigger,” he said, “the canvases just kept getting bigger and bigger.”

It was never going to be anything other than murals for the Venice native. He explained that he would work different jobs to give back to his city and community, but the dream was always a full-time muralist. Now, he’s been called upon by many major LA sports team to depict their team and inspire his city.

The honor is not lost on him. In fact, every mural expresses elements of depth, sometimes elements only true LA fans could pick up on. His latest mural on the corner of West 133rd street is no different.

”RussellThis piece celebrates Westbrook’s return to his home city and imparts on kids around his old neighborhood that their dreams are much closer than they may think.

When asked about Gustavo’s Westbrook mural, commissioned by the Lakers and their Global Marketing Partner, bibigo, Shop owner, Phil, looked so pleased with his role in the promise of inspiring the younger generations around the neighborhood. He said, “I’ve seen four generations come in here together.”

Phil explained that in his past life he worked in aerospace, but then one day it dawned on him — his corporate job wasn’t what he wanted to do with his life. He wasn’t fulfilled and he wasn’t going to do it anymore.

He had always been enamored with sports and the legends the sports world produced. His wife Phyllis Knoll explained, “Oh, Phil could talk to you about anyone, what they’ve done, and what year. Ask him, ask him,” she urged.

“He remembers everything,” she ensured.

Anything is possible for Super Bowl Champs