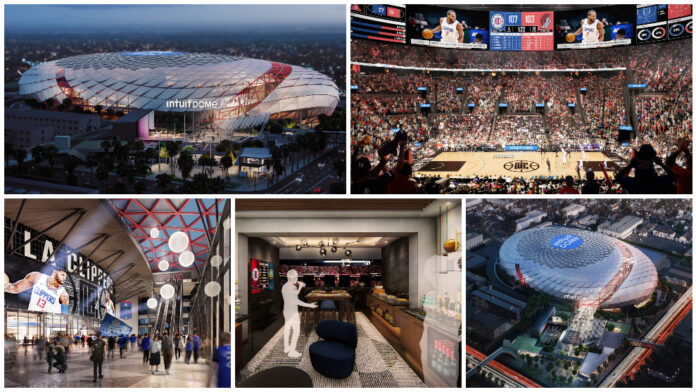 An informational community meeting regarding the construction process of Inglewood’s Intuit Dome was hosted by representatives from the AECOM/Turner Joint Venture Project Team on December 9. The Intuit Dome, future home of the Los Angeles Clippers and located on the southeast corner of Century Boulevard and Prairie Avenue, is expected to be complete by the 2024-25 NBA season. It will be an 18,000-seat sports and entertainment facility sitting on 28 acres.

Held at Southside Christian Church, the purpose of the meeting was to answer construction-related questions from the community, as an increasing number of road closures, periodic noise increases, pothole construction, water line installation, and other standard construction practices are in the near future for Inglewood residents in the area.

Beginning on January 10, upcoming sewer work on 103rd Street, east of Prairie Avenue, is expected to take about 2.5 months, and will affect a lot of residents. The construction engagement team will be notifying homes beforehand.

Potholing on the west side of Prairie Avenue will begin in mid-December and is expected to last about two weeks. Water line upgrades will also take place on the west side, beginning January 17 and lasting 2.5 months.

“Right now, we’re in the earthwork business. We’re working on a lot of shoring and tiebacks, and exporting dirt. We’ve exported about 270,000 cubic yards of dirt to date,” said Ryan Nordin, Turner Construction Company’s head of field operations for the Intuit Dome.

However, one common concern throughout the evening was the alarming increase of dirt and dust particles in the area, bringing poor air quality into neighborhoods- including front lawns, backyards, and school playgrounds.

Once the AECOM/TURNER team opened the floor to questions at the end of the presentation, one of the concerned residents, who’s noticed an increase in coughing from his kids who regularly play outside, requested the arrangement of a broadcast alert system of some sort, for the community to know when not to be outside. His family also suffered from poor air quality during the SoFi Stadium construction era. And to put things into perspective of just how bad the dust has been in his neighborhood, he added, “I wash my car every day. In the morning I’ll wash the car, in the afternoon it’s dirty.”

According to Ryan Nordin, a street sweeper continuously travels the worksite, along with water trucks, which are used to dampen the dirt to restrict its air travel. Both arrangements should help to limit dust and excess debris. But still, “It’s dust mitigation,” says Nordin. “We can’t prevent it all.” The construction team will continue to keep the site as moist as possible throughout work days.

The next Intuit Dome construction community meeting is scheduled for January 6, 2022, at Southside Christian Church at 6 p.m.