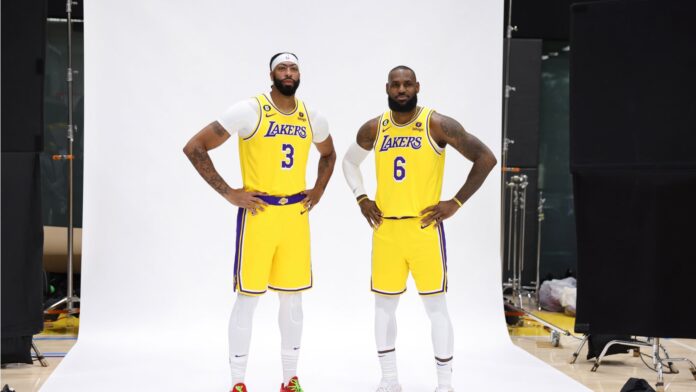 As the 2022-23 NBA season officially started for the Lakers at the UCLA Health Training Center for the team’s Media Day on Monday morning, new coach Darvin Ham wants to turn the page on an injury-plagued, disappointing previous season to focus on what’s ahead.

“I’m extremely excited,” he said. “Last year was what it was; there were a variety of circumstances that led to the team playing the way they did, and the lack of success the team had last year through COVID, injuries … this year, we’ve turned the page. We’re looking out the windshield, not so much through the rearview mirror. We’re excited about the group (VP of Basketball Ops) Rob (Pelinka) and I have put together.

“We’re excited about the summer we’ve had thus far. I think we’re going to create an identity, establishing a defensive identity, that competitive nature, that competitive energy throughout the environment. Last year was last year, this year is a whole new chapter.”

Entering his 20th NBA season, a feat only nine other players have accomplished, LeBron James echoed his new coach’s emphasis on defense.

“Teams that can defend and can get stops when needed, they’re just simply more successful on our league, so the defensive side of the floor is where we’re gonna be hammering home on every single day,” said LeBron. “And understanding that we can defend, make teams take tough shots, keep them to one shot at the goal and rebound and secure the ball, puts us in position to be successful.”

The team’s best defensive player, Anthony Davis, has been speaking with Ham about that side of the floor over the past few months.

“We’ve had some great conversations – a lot about, honestly, defensively,” said AD. “That’s what he leaves his hat on. That’s what he wants us to be is one of the best teams defensively in this league. That goes for everybody on this roster. With me being a defensive-minded guy, he’s asking me questions because I’m used to doing things a certain way.”

Pelinka and his staff acquired several players with a history of defensive intensity and competitiveness, like Patrick Beverley, Dennis Schroder and Juan Toscano-Anderson, to try and better compliment LeBron and AD.

“Darvin and I have spent hundreds of hours going over and over again how we want this team to reflect some of the qualities he stands for the most,” said Pelinka. “Our Lakers fans deserve one thing –  a team that’s going to compete the hardest (of any team) in the NBA. That’s what Darvin stands for as a coach; he’s got strong shoulders and a tough mindset, and we wanted to make sure there are guys on our roster that reflected those qualities.”

Of course, one of L.A.’s biggest issues since their 2020 NBA title has been an inability to get both LeBron and AD on the floor at the same time. LeBron has played 45 and 56 games in the two previous seasons, and Davis even fewer, 76 of the 154.

The Lakers have certainly improved from last season in terms of guard depth, with Russell Westbrook, Beverley, Austin Reaves, Kendrick Nunn, Lonnie Walker IV and Troy Brown Jr. all fighting for minutes. The depth in the frontcourt is less proven behind the two stars. Looking to improve the roster, particularly with LeBron James on the roster, is a constant pursuit, but will also depend upon what’s available.

“Let me be abundantly clear: we have one of the great players in LeBron James to ever play the game on our team, and he committed to us with a long-term contract, a three-year contract,” Pelinka explained. “So of course, we will do everything we can, picks included, to make deals to give us a chance to help LeBron get to the end …  But let me also clear … You have one shot to make a trade with multiple picks, so if you make that trade, it has to be the right one. So we’re being very thoughtful around the decisions on when and how to use draft capital in a way that will improve our roster. And again, we’re committed to doing everything we can to put the best team around LeBron, as long as it’s a smart trade.”

LeBron, AD and Westbrook were not on the court together a ton last season, but even when they were, they didn’t live up to external or internal expectations. With that said, multiple Lakers expressed optimism towards improvement this season, including LeBron.

“Looking forward to being on the part of the journey with him this year, and it’s gonna be a great year for him, and we’re gonna be right there with him,” said James. “We’re here, and it starts tomorrow. It’s all about putting in the work, and you put in the work, you see the results. So, looking forward to it.”

Easing the transition into a new season for Westbrook has been his budding relationship with his new coach.

“Very beneficial,” said Westbrook of his conversations with Ham. “Being able to talk and understand about things we want to do, and how we want to do them.”

Richard Williams should be the story, not Will Smith