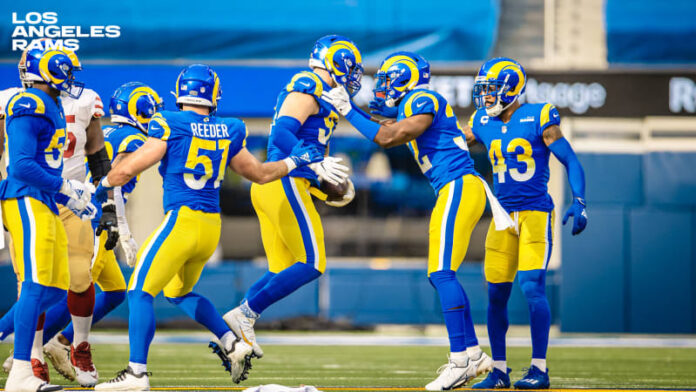 The 7-4 Rams face the 6-5 Cardinals on Sunday at State Farm Stadium in Glendale, Arizona in the first meeting between the two teams this season.

In advance of the contest, theRams.com takes a look back at some of the notable Rams-Cardinals games of the Sean McVay era.

Donald’s sack total gave him 19.5 for the season, setting a new franchise single-season record, while Anderson fell just one yard shy of setting a new career-high for rushing yards in a single game.

Wide receiver Robert Woods also had a big day for Los Angeles offensively, posting six catches for 89 yards and a touchdown plus two carries for 15 yards and another score.

The Rams got off to a fast start in this one, building a 20-0 halftime lead behind a pair of Greg Zuerlein field goals, a 2-yard Tyler Higbee touchdown catch and a 1-yard Todd Gurley touchdown run.

That advantage grew to 34-0 midway through the third quarter behind a 10-yard Cooper Kupp touchdown catch and a 31-yard pick six by Taylor Rapp, Rapp’s first interception of his career. It took a 15-yard Kyler Murray touchdown run with 8:35 left in the fourth quarter for the Cardinals to escape being shut out.

Most notable from this game, though, was Higbee’s performance. His 107 receiving yards not only marked his first 100-yard game of his NFL career, but also the first of four straight such games. Only three other tight ends in NFL history have had four consecutive games with 100 or more receiving yards.

A memorable sendoff for the Rams’ tenure inside Los Angeles Memorial Coliseum, quarterback Jared Goff’s pair of fourth-quarter touchdowns to Higbee and wide receiver Robert Woods broke a 17-all tie and gave Los Angeles enough cushion to withstand a late 1-yard Kenyan Drake rushing touchdown to hold on for the win.

Arizona reached midfield on the final drive of the game, but it ended with Los Angeles outside linebacker Samson Ebukam recovering inside linebacker Troy Reeder’s forced fumble on Damiere Byrd to officially clinch the L.A. victory.

Goff also threw for 354 yards with one touchdown and one interception in the win, completing 24 of 32 passes. Wide receiver Brandin Cooks posted 7 receptions for 159 yards, including a 57-yard grab.