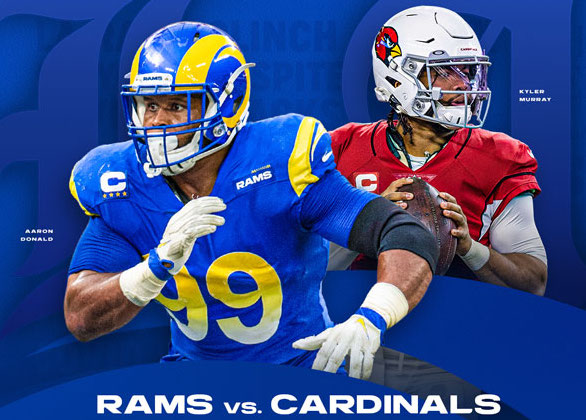 The No. 4-seed Rams open the playoffs hosting the No. 5-seed Cardinals in the Wild Card round, in what will be just the second postseason meeting between the two teams in series history. Kickoff from SoFi Stadium in Inglewood, Calif. Monday night is scheduled 5:15 p.m. pacific time (ESPN/ABC, ESPN2, ESPN+, ESPN Deports, locally on ABC7). Click here to purchase tickets to the game.

In advance of the contest, here is your First Look at Rams-Cardinals, presented by Audi:

Signed RB James Conner to a one-year deal in April 2021: Conner has capitalized on the prove-it deal, his 18 total touchdowns good for third-most in the NFL during the 2021 regular season. However, he left last week’s game against the Seahawks with a rib injury and is still being evaluated as of Tuesday.

Signed WR A.J. green to a one-year deal in March 2021: The 33-year-old Green proved to be a valuable veteran signing, recording 54 receptions for 848 yards and three touchdowns while playing in all 16 games during the regular season.

QB Kyler Murray completed 28 of 39 pass attempts for 240 yards and one touchdown in Arizona’s 38-30 loss to Seattle.

Conner carried the load for the Cardinals’ backfield with 15 rushing attempts for 52 yards and one touchdown; he also caught Murray’s lone touchdown and added six receptions for 41 yards.

The regular season series was split 1-1, the Cardinals taking the first meeting in Week 4 before the Rams responded with a thrilling Week 14 win.

Now, the decisive third meeting comes in the playoffs, and with both teams dealing with key injuries.

Arizona on Jan. 7 designated defensive lineman J.J. Watt for return from Injured Reserve, putting him in the 21-day activation window. However, wide receiver De’Andre Hopkins has been on Injured Reserve since Dec. 18 due to the knee injury sustained in Week 14 against the Rams, and Conner is dealing with the aforementioned rib injury coming out of last week’s game against the Seahawks.

Similarly, health is a big topic for L.A. this week with Jordan Fuller sustaining a season-ending ankle injury, safety Taylor Rapp in concussion protocol and Darious Williams sustaining a shoulder injury that is still being evaluated.

So compared to that Week 14 meeting, the Cardinals’ offense and the Rams’ defense could potentially look a bit different. In order to advance, the Rams will need big performances from their next men up. 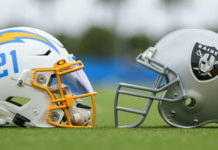 Corey Linsley Nominated for 2021 Walter Payton Man of the Year...