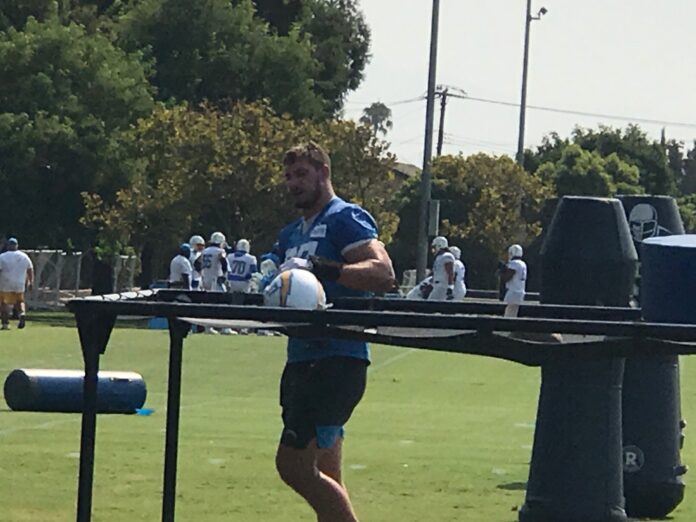 COSTA MESA–A little more than a month from now the Chargers will kick-off the 2020 NFL season when they visit the Buckeye State for a date with the Cincinnati Bengals on Sept. 13th.

However before then, there are an abundance of decisions to be made for a team that finished in the basement of the American Football Conference West Division with an abysmal 5-11 record.

As the team resumed training camp this week and allowed the media to get a glimpse of the framework of a roster formula during the COVID-19 pandemic, there appears to still be more questions than answers.

We can assume that veteran Tyrod Taylor will line-up behind center and wer are most certain that Taylor will be frequently targeting star wide receiver Keenan Allen who caught 104 passes from since departed Phillip Rivers for 1199 yards and six  touchdowns.

Allen is a load and on Aug. 19 proved that he may already be in mid season from by hauling in a splendid over the shoulder touchdown from Taylor during a pad less scrimmage.

Dude is a absolute workhorse and the pulse of the offense in the post Rivers era, but the question remains who will be his primary thrower.

Best guess for now is Taylor, similar to what Taylor was in Cleveland when the Browns drafted Baker Mayfield in 2018.

Back then all things seem to be going according to plan under then head coach Hue Jackson, but Taylor got injured, Mayfield took over and has been the face of the Browns franchise.

I was in Cleveland when it all transpired and now with the Chargers, Taylor will have to hold off another high quarterback draft pick Justin Herbert, the No. 6 pick in the 2020 NFL draft.

Herbert is not ready and without a snap in the since cancelled preseason will likely have his clock reset to next season.

That is if Taylor can physically hold up and the Chargers can win enough games to stay attractive and competitive in their new home at SoFi Stadium.

Those are big ifs and can imagine the Chargers seeking to discover if Herbert is the long term answer for the franchise. During camp he towers over Taylor at 6’6, but at this level there is no simulation for game speed and experience.

Thankfully for the Chargers this may also be a season without fans, saving for what could potentially become a nightmarish campaign.

Buy, hey this is training camp where hope springs eternal and all teams in the NFL are undefeated with expectations of something spectacular.

The bring spot for this football team will be the defense which will be anchored by all world defensive end Joey Bosa, who in year five  is already being projected as one of the great linebackers in the history of the franchise which produced the late Junior Seau.

The 6’5 Bosa is one of those rare talents that just stands out from a crowd even during camp. If you didn’t know who he was you’d tend to think he was an undrafted rooking trying to make the team, but all of his motions on driving through the dummies is effortless.

At 25 he just came off an eye popping season where he recorded 11.5 sacks

On the opposite end is another terror in 9 year veteran Melvin Ingram who is coming off a brilliant 39 tackle, 7 sack season in 2019.

Head coach Anthony Lynn is going to need all he can get from them and then some because points on the offensive side is going to be a premium, especially since the reps are far and few in between this season.

California to Receive $3.8 Billion in Federal Cash to Help Childcare...