The increase isn’t just being felt at SoFi Stadium though, as attendees at the Super Bowl Experience at the Los Angeles Convention Center, L.A. Live and other hotspots around the city have reported a much larger law enforcement presence in recent days.

Officers could be seen standing by at each entrance to the Super Bowl Experience, a “football theme park” allowing fans to experience NFL history up close, on Sunday, as thousands of fans flooded in and out of the convention center for the event.

Along with the LAPD, members of the Los Angeles County Sheriff’s Department and federal partners of the FBI, the Secret Service and Department of Defense have all begun to descend upon the Southland in order to prepare for the week-long party that is planned for Super Bowl LVI.

Some of the major procedures underway include a helicopter from the Department of Energy Nuclear Security Administration, equipped with radiation sensing technology. While Customs and Border Protection agents plan to utilize a scanning device that can detect weapons, explosives or any other type of contraband, not just on people, but in their vehicles.

Their reach is expected to reach from Downtown L.A. to Inglewood and beyond, including tracking any potential concerns surrounding the area through Feb. 13, the day of the big game.READ MORE:NFL Offering Super Bowl Experience To Fans At L.A. Convention Center

According to LAPD Chief Michel Moore, preparations for this event have been underway for the greater part of the last two years.

L.A. County Sheriff Alex Villanueva, who could be seen wearing both a Rams hat and a special edition Super Bowl LVI Sheriff’s badge, encouraged Angelenos to celebrate the Rams berth in their “hometown” Super Bowl responsibly, by signing up for a text alert system, which will relay game day traffic related issues or emergencies.

As the game draws nearer, Inglewood residents can hardly contain their anticipation. “The whole city is excited,” said Tyson Baker, an Inglewood resident who was enjoying the experience with his son on Sunday. “It’s lit, as the kid said,” he continued.

Despite the expected increase in both foot and vehicle traffic, and some potential stress when heading to the local supermarket or restaurant, he said it’s all worth it. “I mean the Super Bowl is big all over the world, “So for that to come to your city, you should be proud and you should be patient… and you should be prepared to wait a little bit.” 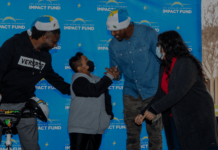