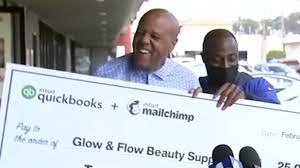 INGLEWOOD, Calif. (KABC) — SoFi Stadium’s Super Bowl transformation won’t happen overnight, but if you ask those working to make it all happen by deadline, it kind of feels like it.

The committee started working on a plan months ago and was recently implemented, but the team couldn’t really build it out until after the NFC Championship game. Around the stadium, business owner Damon Haley describes the anticipation as magical.

“There’s just so much energy in the city,” said Haley of Glow + Flow Beauty Supply in Inglewood.

He opened the store in November 2019. Four months later, he was forced to adjust due to the COVID-19 pandemic and hasn’t stopped adjusting since.

“The lines outside and social distancing inside … We had to invest in all of those things to stay open,” said Haley.

On Tuesday, the Rams, in partnership with Intuit, wanted to make sure Haley’s shop stays open.

He plans to use the gift of the Super Bowl in ways that will make a big impact long after it leaves the city of Los Angeles.

“I think now I have more creativity to figure out how we’re going to do a glow girl program to help insist the self-care of young girls,” said Haley.