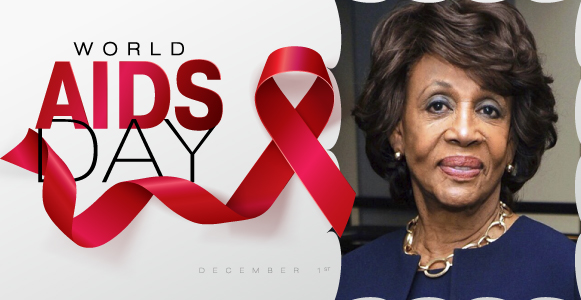 Rep. Waters: “On World AIDS Day 2020, we must confront the unprecedented challenges of two simultaneous global pandemics… In honor of the millions of people we have lost to HIV/AIDS, I vow to continue my fight to keep our communities healthy and put an end to the HIV/AIDS pandemic once and for all.”

WASHINGTON, D.C. – Today, Congresswoman Maxine Waters (CA-43), Chairwoman of the House Committee on Financial Services and a congressional leader in the fight against HIV/AIDS, issued the following statement in recognition of World AIDS Day, which is celebrated every year on December 1:

“Today, we commemorate the first World AIDS Day since the beginning of the COVID-19 pandemic. These two global pandemics have striking similarities, and both require a sustained commitment from individuals and institutions at all levels of society to save lives. Many of the same communities that have suffered from the disproportionate impacts of HIV/AIDS – including African Americans, Latinx, and other communities of color – are now suffering and dying disproportionately from COVID-19.

“Throughout my career, I have been a strong advocate for HIV/AIDS awareness, prevention and treatment, with a particular emphasis on the minority communities that have borne the brunt of the disease. Before coming to the U.S. Congress, I worked with local organizations and community leaders to raise funds for local minority HIV/AIDS initiatives in Los Angeles, and I introduced legislation in the California State Assembly to address the HIV/AIDS epidemic among African Americans.

“As a Member of the U.S. Congress, I spearheaded the establishment of the Minority AIDS Initiative (MAI), which has significantly expanded HIV/AIDS prevention, screening, and treatment efforts among racial and ethnic minorities and reduced AIDS disparities. I am proud to report that funding for this critical initiative has increased from the initial appropriation of $156 million in Fiscal Year 1999 to more than $425 million per year today. Earlier this year, the House passed my amendment to increase funding for the MAI by an additional $5 million in FY 2021.

“On World AIDS Day 2020, we must confront the unprecedented challenges of two simultaneous global pandemics, and we must resist the temptation to abandon the struggle against a 29-year old pandemic that has already killed tens of millions of people around the world while we work to stop a new pandemic that could kill millions more. In honor of the millions of people we have lost to HIV/AIDS, I vow to continue my fight to keep our communities healthy and put an end to the HIV/AIDS pandemic once and for all.”