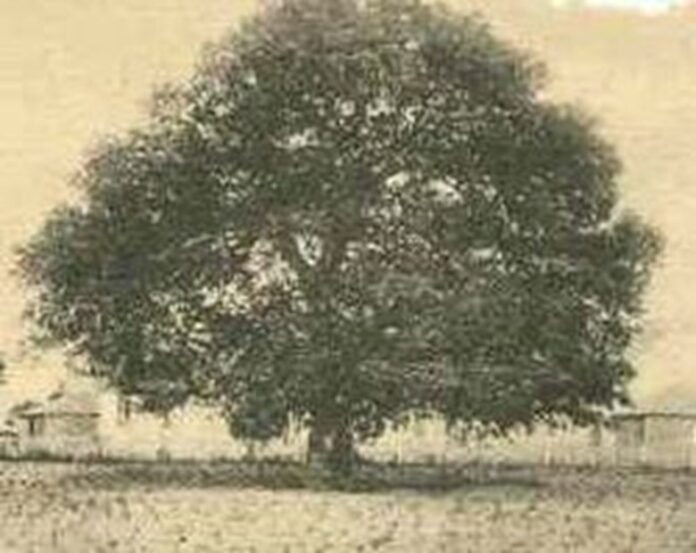 The Emancipation Oak is an historic tree on the campus of Hampton University in what is now the City of Hampton, Virginia on the Chesapeake Bay, across from the city of Norfolk, Virginia. The large sprawling-southern live oak is 98 feet in diameter, with branches which extend upward as well as laterally. It is designated one of the 10 Great Trees of the World by the National Geographic Society and is part of the National Historic Landmark district of Hampton University.

During the American Civil War, Fort Monroe became a place of refuge for African American people escaping slavery. The Union Army defined the people as contraband in order to provide them asylum. Virginia law had prohibited the education of enslaved people following the Nat Turner slave rebellion in 1831.

In November 1861, the American Missionary Association asked Mary Smith Peake to teach children of freedmen at the contraband camp related to Fort Monroe. She started her classes outside, under the tree. Peake was the first black teacher of the AMA, which expanded to support numerous educational institutions in the South. Her base was 3 miles from the protective safety of Fort Monroe, and her classes taught up to 50 children during the day and 20 adults at night.

In 1863, the Virginia Peninsula‘s black community gathered under the oak to hear the first Southern reading of President Abraham Lincoln‘s Emancipation Proclamation, leading to its nickname as the Emancipation Oak.

After the conclusion of hostilities, a school was founded there in 1868 by General Samuel C. Armstrong and the American Missionary Association as Hampton Normal and Agricultural Institute (HNAI), a land grant school. From 1872 to 1875, one of its many students was Booker T. Washington, the son of a freedman. He became a famous educator who founded Alabama‘s Tuskegee Institute in 1881. In the early 20th century, collaborating with the philanthropist Julius Rosenwald, Washington and staff at the Tuskegee Institute helped to establish dozens of rural schools for African-American children across the South.

HNAI became Hampton Institute in 1930 and gained university status in 1984, becoming Hampton University. It is one of Virginia’s major institutions of higher education. In the 21st century, the Emancipation Oak still stands to provide both shelter and inspiration to the school’s students and staff.

Now here is the double bummer!

I was in the 1971 graduation class from Hampton University and because of destructive on-campus protests related to the Vietnam War, the campus closed two weeks before final exams and all of the students were sent home. Seniors expecting a graduation ceremony, who had completed graduation requirements were denied a graduation and received their diplomas by mail.

50 years later, me and my surviving graduating classmates intended to return to our ‘Home by the Sea’ to celebrate our 50th year NO Graduation Anniversary. The double bummer emerged when we were informed that due to COVID-19 the campus will remain closed through the 2021 school year and no one would be permitted on the campus or anywhere near the Emancipation Oak.