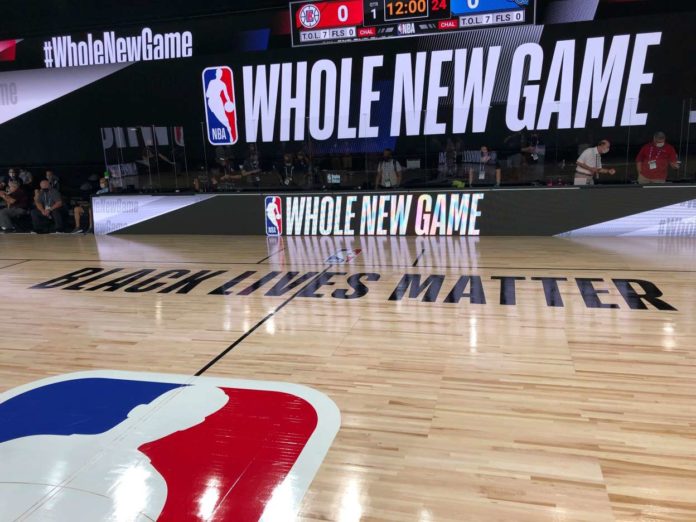 On July 30, the NBA will resume its season with 22 of its 30 teams competing in Orlando in the bubble at Disney World during what has mushroomed into a growing coronavirus pandemic.

It is a league that is dominated by Black players, most of who hail from the similar urban communities that cost George Floyd his life.

The tragic video murder of Floyd is why all sports leagues are scrambling to demonstrate their compassion in the Black Lives Matter movement, one that has shaken the foundation of racism like never before.

For the NBA, because of its many Black star players they had to go above and beyond to symbolize the movement, in other words to show such communities that they really care.

After all without those urban communities, it would be void of the likes of LeBron James the most outspoken athlete on social justice since Muhammad Ali.

The league revealed its courts in Orlando that the players will be playing on with Black Lives Matter painted above the Jerry West logo.

Players have been allowed to wear messaging on their jerseys, the Lakers top stars James and Anthony Davis opted against it, while white player Kyle Korver of the Milwaukee Bucks decided to wear a slogan.

The games themselves will be played without fans; players will be socially distanced from each other, the scorekeepers and operators situated behind plexiglass.

Selected media has been approved, many of them if not all because I was not able to obtain that information are representing national outlets such as ESPN, Sports Illustrated, Yahoo, Associated Press and in all likelihood rising websites such as Stadium and The Athletic.

Some of these organizations are represented by Black reporters, but the majority of all media covering the NBA and other professional sports leagues are predominantly white.

It has been that way for quite some time and there is not one Black prominent media member such as a Stephen A. Smith remotely concerned about anybody but himself.

Its hard for Blacks within organizations to be become advocates for social justice without the threat of losing their prestigious jobs.

Jemele Hill was a rising star at ESPN until she began commenting about Donald Trump, now she is with The Athletic.

Black community newspapers with evaporating advertising budgets have always struggled to pay the cost of covering teams within their region and the respective teams have not made any accommodations to change that.

The teams are in a delicate spot when it comes to Black media because of their partners and other outlets.

My mentor the late Brad Pye, Jr. was the Jackie Robinson of sports reporters, demanding equal access for Blacks and he understood the responsibility that Black reporters had to perform at a high standards so that the next young aspiring journalist would have that seat on press row.

Today NBA players are more concerned with control of messaging and monetizing their brand than they are accommodating Black community newspapers.

They don’t see us as significant, that is until they have too. Usually when the ball stops bouncing and life takes a bad twist or turn.

Black community newspapers are the most reliable source for street cred, beyond corporate giants. Players like Magic Johnson understood that.

Its time the NBA realizes that the relationships that Black community newspapers have within their region are paramount to the Black Lives Matter movement.

It’s time that LeBron James, my favorite athlete, also understands that and demand that we enjoy the same access to the NBA as all other media outlets.

Black Media Matters too, now more than ever.