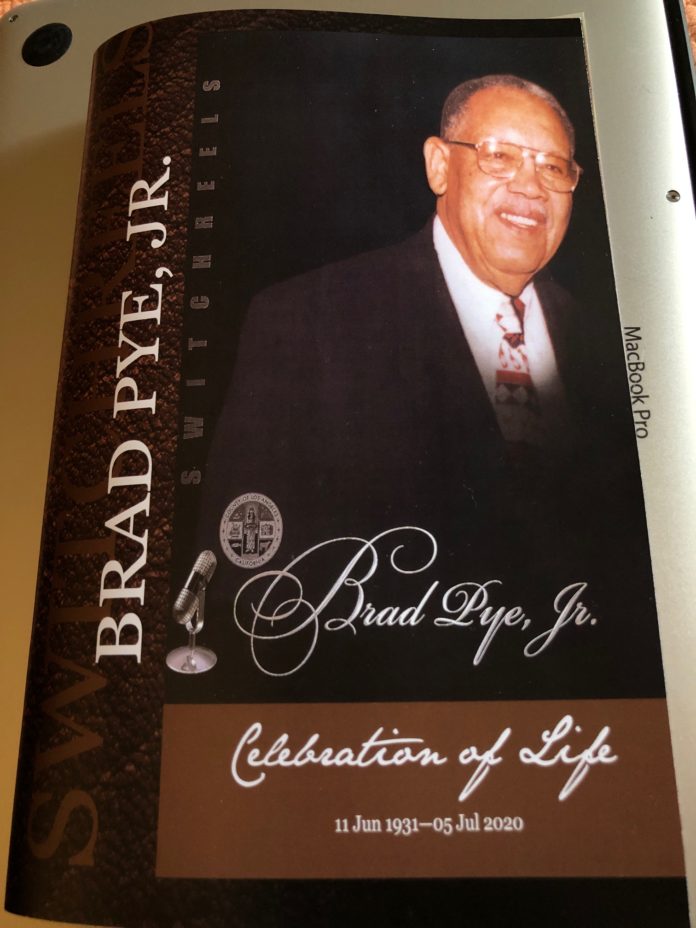 Brad Pye, Jr.’s long enduring journey, one that began modestly in Plain Dealing, LA, evolved in Los Angeles as a pioneering journalist and broadcaster came to a solemn conclusion at Inglewood Park Cemetery on a hazed Tuesday on July 22nd.

Pye’s life was celebrated at the Inglewood Park Cemetery Chapel by an intimate gathering of family and friends amid the cloud of a COVID-19 pandemic that has not just claimed lives, but also reduced memorials.

After succumbing following multiple health complications, Pye’s daughter Jill was devastated to learn that a full celebration of her dad had to be scrapped because of the swelling pandemic regulations. He was 89 years old.

As Andre Egans version of Blessed Assurance bellowed from the chapel speakers, Pye’s family inclusive of daughters Jill White, Jenice Pye-Conkrite, Jan Pye, Sharee Hollis, five grand children and four great-grand children took the painful steps to their seats for a final moment with the man renown for catch phrases Switch Reels, Pretty Little Green One and Have a Ball laid rest in a silver casket draped with an American flag.

Squirms, tears and emotions pierced through the slice there after of the celebration for a man who lived to praise others, advocating for racial justice in sports and politics while breaking down color barriers that has forever changed the landscape.

Hahn, whose father was along time ally of Brad, could not attend because she had been in contact with someone who had contracted the coronavirus and had to be quarantined.

An aid that represented her spoke of the fondness the Hahn family, namely her late father Kenneth Hahn shared for Brad and she continued to demonstrate it throughout his life and through the service as she sponsored the full color obituary booklets.

Vaughn was overrun with emotion as he remembered a man she shared a friendship with for 30 years.

He told of how Brad used his influence as managing editor and sports editor at the Los Angeles Sentinel to break racial barriers in every sport including football, baseball, boxing and track and field.

Vaughn also told of the story of the late fame criminal attorney Johnnie Cochran 30-year friendship with Brad and how it was Brad that was instrumental in establishing his private practice as the only Black retinal specialist on the West Coast.

“My dad would work four jobs and when he got home we all had to have our homework on his desk,” Jan said. “Our jobs was to make sure the house was cleaned and he would wake us up if a cabinet door was left open.

That discipline was the trademark of Brad Pye, Jr.’s life.

Washington, the daughter of Jill was among the many family members, including Jill and Jenice who cared for Brad during his final days.

At the burial at Inglewood Park Cemetery ensued with a three Marine military salute to the bugle of  “Taps”.

SoFi Stadium will fill over 3,000 event-day positions throughout this month’s...