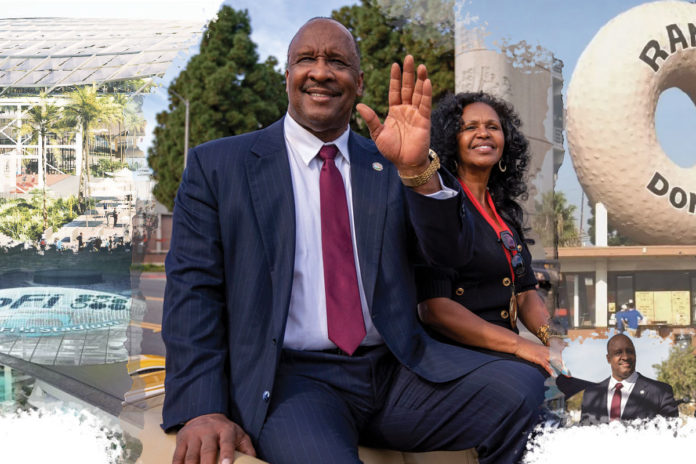 As the region continues to reel from the tragic death of Kobe Bryant, Black History Month arrives for the purpose of reflections and historical perspective and there is no greater destination than the City of Inglewood and Mayor James T. Butts Jr.

Inglewood has endured 12 mayors since being incorporated in 1908 and did not elect its first Black mayor until Edward Vincent in 1983.

Under Vincent, Inglewood became the first California city to declare Dr. Martin Luther King Jr. birthday as a holiday. It was also during this decade, whites left the city in increasing numbers.

The late Vincent left the mayor office to run for Assembly and his unexpired term was fulfilled when Judge Roosevelt Dorn was elected as mayor in 1997.

Dorn won a full term in 1998 and again from 2003-2007 when he resigned under the cloud of a criminal complaint. Councilman Daniel Tabor assumed his remaining three months and was defeated soundly in his reelection bid by Butts.

During 1980s through 2007, Inglewood was best known for the lyrics in Dr. Dre’s  “California Love” as one of bars rips “Inglewood always up to no good” as crime rates increased and economic opportunity decreased.

Butts got his professional start in Inglewood joining the police force in 1972, subsequently holding several positions as a police officer, commander of a SWAT team, an undercover officer, and homicide detective. He was promoted to Sergeant in 1981, to Lieutenant in 1984, and then to Commanding Officer of the narcotics division in 1986.

He left Inglewood for Santa Monica Police Department where he quickly rose through the ranks in 1986 and became the first African American Chief of Police for the city.

“When they offered me the job I was stunned because it was not civil service and it was at will and at 37 (years of age) and I would have to make it to 53 to fully maximize the retirement system, and 16 years is a long time,” Butts recalled.

He bounced the job offer off individuals he trusted such as former KCBS talk-show host Truman Jacques, who was the communications director for the City of Inglewood during the time.

Jacques told Butts to climb high while his legs were young and strong and Butts has never looked back.

He served as the longest term as chief of police in Santa Monica for 15 years, cutting the crime rate by 64 percent during his tenure.

With strong young legs as Jacques would describe them, Butts kept climbing. He was offered a position as assistant general manager of Los Angeles World Airports (LAWA) where he supervised 1,100 employees and was in charge for $115 million budget, responsible for public safety, counter terrorism and traffic control at four airports, which included LAX.

LAX had been under intense scrutiny following a KCAL9 news expose’ that detailed LAX as being unsafe.

Butts eventually transformed LAX and by the time he left the airport was rated number one in nation in aviation security by the Transportation Security Administration.

Meanwhile, the City of Inglewood was marred in turmoil and despair. Hence, community stakeholders approached Butts about running for mayor, on the merits of what he had previously accomplished he would be a Godsend.

However, this challenge would become his greatest one yet.

Butts inherited a City on the brink of insolvency, one that may not be able to pay their bills in the coming months following election.

He also took over a city that was much like the one that Dr. Dre described in that infamous rap song “California Love”.

In addition Butts would have to accept a more than 50 percent pay cut as Mayor of Inglewood. “I thought that I owed the city because this is where I got my first start to prove myself where the other agencies would find me desirable.”

Butts had made bids in four other elections, but the only one he was successful at was when won for may of the Inglewood in 2010.

Inglewood was in serious trouble with an $18 million structural deficit, and on a straight-line projection to not make payroll.

He had never intended to become an elected official, but by golly here he is.

His strength in management provided him with the talent and experience to make the necessary decisions, tough decisions to furlough workers, outsource task the city could not afford to pay for and ultimately save Inglewood.

Today, Inglewood sits on a surplus and is on the cusp of becoming the sports and entertainment capitol of the world, a goal that Butts had in mind when he became mayor.

In 2020 the City will have a grand opening of the nearly $5 billion Sofi Stadium, the Rams and Chargers will both call home.

“The common ask of a team that is relocated in the NFL is that you (a city) would spend somewhere between $300 and $500 million and cities justifying it,” Butts added.

That philosophy almost never works, and cities are left holding the bag until the team leaves for greener pastures, but Butts managed to bring two NFL teams to Inglewood for $18 million that would only have to be paid back when the city makes $25 million.

In addition to the NFL, the NBA Clippers are on trek to come by 2024, the Super Bowl in 2022, the College Football Championship in 2021, the opening ceremony of the Olympics in 2028.

The City of Inglewood has come a long way from its bleak past and as Mayor James T. Butts Jr. will tell you not close to fulfilling its ultimate promise.

A more appropriate song for Inglewood, the City of Champions, is the Carpenters “We’ve Only Just Begun.”