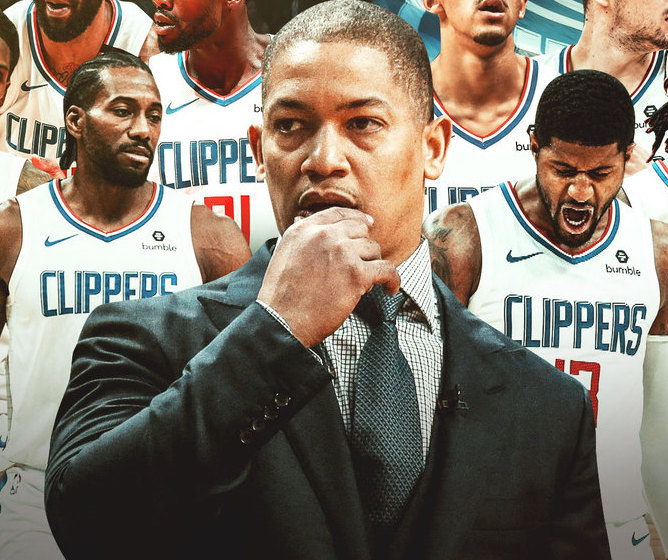 Don’t you just love the Clippers?

Last year when they were picked to tear through the Western Conference on their way to their first ever NBA Finals, they lost in disastrous fashion to the Denver Nuggets that ultimately cost Doc Rivers his head coaching gig.

Rivers landed on his loafers in Philadelphia with a cast of rising stars such as Joel Embiid, but the lead blowing routine followed him as the Sixers were eliminated by the upstart Atlanta Hawks in the East Semis.

Clippers owner Steve Ballmer needed only to look a few seats down from where Rivers was sitting to find his successor in Tyronn Lue, a brilliant basketball mind who led the Cleveland Cavaliers to their first and only NBA title in 2016.

Lue, a disciple of Phil Jackson, essentially turned down the Lakers job when the front office tried to force a staff on him. He was hired by the Clippers to work with Rivers as they did previously in Boston.

This time it didn’t work out, but for Lue things turned out well. He was named the Clippers coach amid the four year transition before they come to Inglewood.

The Clippers new arena in Inglewood, Inglewood Basketball & Entertainment Center (IBEC) will be a one-of-a-kind destination for basketball and live experiences. Construction on the new facility will begin in Summer 2021, and will become the new home of the Clippers for the 2024-25 season. Click below to sign up for early access to season ticket opportunities and first-in-line-privileges to experiences IBEC will offer.

That’s all fine and dandy and much to be giddy about, but the current Clippers are giving their growing fans base some tense filled moments as they contest the Phoenix in the Western Conference Finals.

Having already dispatched the Dallas Mavericks and the top seed Utah Jazz, the Clips are taking aim at the Suns without the services of arguably their best player Kawhi Leonard who is nursing a suspicious knee injury.

I say suspicious because no one is giving a timeline on his return signaling it could be more serious than indicated. Leonard has not play at all in this series first two games which the Clips lost and trail 0-2 in the best of seven series.

They will come home on June 24 for game three in a must win situation.

Paul George stepped up in Leonard absence in the Utah series and has been a rock against the Suns which is without star guard Chris Paul (COVID protocol), but his two missed free throws in the waning seconds of game two were a killer in a game the Clippers lost by a point with less than a second remaining.

This team is like a box of Cracker Jacks you don’t know what you’re going to get from one night to the next, or for that matter who your star will be. It could be sharpshooting Reggie Jackson, or fresh faced 2019 second round draft pick Terance Mann, perhaps lefty dead eye marksman Luke Kennard, steely veteran Marcus Morris or George.

The one sure bet is Tyronn Lue will match schemes with Suns pilot Monty Williams and make every necessary adjustment he can to put the Clippers in position to win and advance to their first NBA Finals.