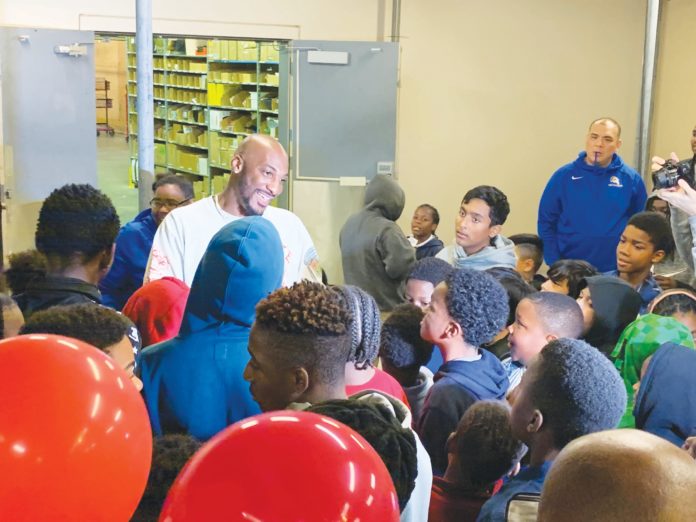 The arrival of the Los Angeles Rams in the City of Inglewood is not only altering and improving the city’s landscape as they continue the development of the SoFi Stadium and Entertainment Complex, they are also demonstrating social responsibility and effective community relations as they contribute to the overall well-being of Inglewood’s residents and neighboring communities.

To kick off the event, Talib provided remarks to the youth over an evening meal, provided by Chick-Fil-A and $100 gift cards for each child to purchase items on their holiday wish lists.

Throughout the year, the Rams will provide engagement opportunities with current players, alumni, coaches, scouts, and football operations staff, as well as host a career day for the Watts Rams players to expose them to business opportunities within the sports industry as a way to expand their knowledge and ignite their passions beyond the playing field.

The young Pop Warner football players, who recently won the D R Championship, were as enthusiastic about meeting a former professional football player as they were about receiving the $100 gift card each player received for their Target shopping spree.

When asked if he has been a good boy this year, he promptly replied, “I’ve been off and on, but mostly good.”

After receiving the $100 gift card and admonishments from Talib to behave responsibly and respectfully inside the store, the players were accompanied on their shopping spree with volunteers, Target staff and Los Angeles Rams staff members.

They were advised to keep track of the total of the items they select so that they may get as close to the $100 as possible.

Another ‘off-the-field touchdown’ for the Los Angeles Rams!